A Comparison Between Bitcoin And Gold 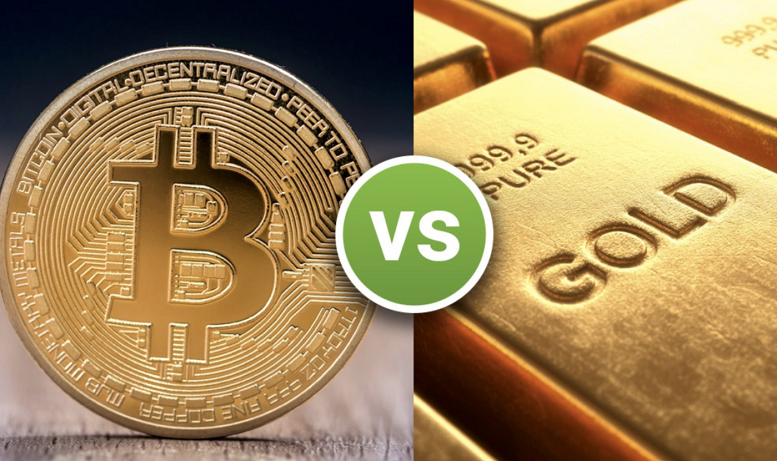 This article was originally posted at Medium, here.

Gold and bitcoin are two assets that have a lot of die-hard “true believers,” people for whom the asset class seems like essential investments. They also each have severe detractors who argue that one or the other is not a good investment at all.

But bitcoin has been called blockchain gold, which begs the question — how similar are they as an investment?

There are far more differences than similarities between these two assets. It is somewhat strange how they are lumped together when one looks closely at the details.

Gold’s history spans back over ten thousand years and across the globe, while bitcoin has existed for a little more than a decade. The former is a physical object that can be worked into many shapes and sizes, whereas bitcoin only exists in the digital realm.

Perhaps the biggest difference is a risk: Gold is often seen as one of the safest investments, while bitcoin, although widely considered the leading crypto investment, is still considered an extremely high-risk investment among non-crypto investors.

How safe is investing in gold?

Even compared to other precious metals, gold is a safe investment. However, Warren Buffet argues that it cannot deliver significant gains over the long term, unfavorably comparing gold to stocks in this shareholder letter.

However, central banks of the world bought more gold bullion in 2018 than they have since 1971 when the U.S. ended the gold standard. Gold believers expect gold to take off — presumably as the dollar weakens — and are ready to be rewarded for their faith in the metal’s enduring value.

If there’s one thing that bitcoin investors are interested in, it is beating other asset classes over the long-term. Many true believers forecast incredible gains for bitcoin in the coming years. One of the most extreme examples of this comes from the self-described “presidential candidate in exile” and infamous pseudo-celebrity, John McAfee, who predicts that bitcoin will be worth $1,000,000 by the end of 2020.

McAfee’s prediction seems extreme, but other optimistic speculators abound. Jack Dorsey, the CEO of Twitter and Square predicts that bitcoin will become the “single currency” for the world in approximately ten years time.

These kinds of predictions showcase a core difference between bitcoin and gold. True believers in bitcoin think it will rapidly change the world and make a lot of investors rich in the process. True believers in gold tend to focus on safety against any form of financial disaster, even to the point of societal collapse.

There is some overlap, especially within libertarian and anarchist communities, who see bitcoin as another hedge against government control and manipulation.

This mindset is perhaps best explained through the cult classic book The Sovereign Individual by investors James Dale Davidson and Lord William Rees-Mogg. The book outlines the idea that government-issued fiat currencies will be replaced by loose collectives of individuals using digital currencies and gold.

The key advantage of bitcoin over gold

Gold is much less practical for day-to-day use than bitcoin. The latter may have its flaws, but at least in theory, it allows for near-instant digital micro-transactions without a centralised bank in the middle.

One cannot typically buy a cup of coffee with physical gold. There are some workarounds such as debit cards that payout from a physical gold stash held by a third party, but these are edge cases. The core point of bitcoin is to allow for a new kind of transaction, nearly instant and frictionless, which is essentially opposite the nature of gold.

The worst case scenarios for gold and bitcoin investors

What is the worst case for investors in each asset class? Gold has an interesting possible worst-case scenario: Asteroid mining.

Some people believe that the current wave of space entrepreneurship from Elon Musk’s SpaceX and Jeff Bezos’s Blue Origin could lead to asteroid mining that will bring substantial additional amounts of gold into the earth’s marketplace. This could theoretically increase the supply of gold, no alchemy needed, and thus lower the price of gold, hurting investors.

It may sound like science fiction, but one may need to really consider the future impact of space exploration on gold assets. For anybody thinking about investing in large amounts of gold and passing it down to their grandchildren, this could be a real problem.

For bitcoin, the worst case is more immediate: The system could simply fail. This could happen through market pressure if the optimists are wrong and the economic system collapses as a bubble like the famous Tulip Mania of the 1600s. It could also result from some unforeseen technical glitch or attack vector being discovered and ruining the security of the system.

The simplest way that bitcoin could fail would be through a massive disruption of the internet. If a solar event knocked out all of the computers in the world, bitcoin’s transaction history would simply vanish.

Ethereum founder, Vitalik Buterin warned in tweets that cryptocurrencies are “still a new and hyper-volatile asset class, and could drop to near-zero at any time”. Gold will always have the advantage of having intrinsic and traditional value.

Novem provides a simplified means to acquiring and holding LBMA-certified physical gold by linking gold to a blockchain token. The 999.9 gold token is both linked to real gold prices and tied to real physical gold stored by Trisuna in Triesen, Liechtenstein. It is tradeable, fungible, and if so desired, deliverable.

In addition to the 999.9 gold token ($NNN), Novem is creating a limited number of Novem utility tokens (NVM) that provide token holders with a 5% discount on buying the 999.9 gold-backed tokens.

By creating this new financial infrastructure, Novem is ushering in the future of gold and is doing it better than any other gold token with certified secure storage, market rates, third-party auditing — and is adhering to world recognised gold standards — making it even safer than buying jewellery or gold bullion.

Why Novem Gold Stores It’s Gold In A Secure Storage In Liechtenstein?