Amid a Shift in Monetary Policy, Slowdown in the Global Economy and China-Trump Brawl, Gold is The Perfect Shield 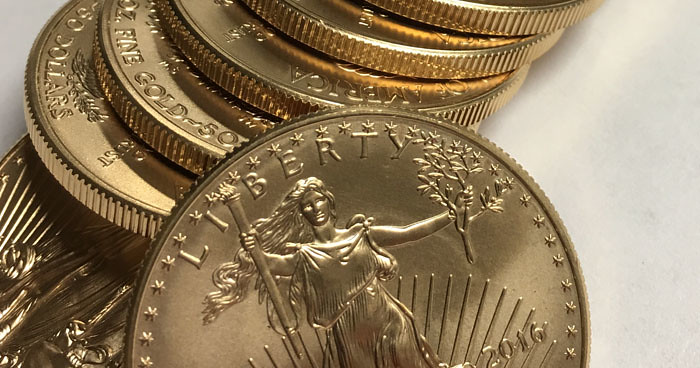 The economic sentiment indicator (ESI) of the European Commission shows that the continent is still experiencing the 2011-2013 Euro crisis fall out. The ESI shows a slump in all economic sectors except retail with Brexit being the staple topic of discussion in Eurozone matters in 2019.

However, a more massive risk to the European and indeed, the global economy, has been building in Europe’s South. The Italian economy has been in stagnation for 20 years and is likely headed to a recession.  The banks in the Southern European nation are financially weak, burdened with bond refinancing. The world’s oldest bank Monte dei Paschi di Siena, for instance, needed a $9.4 billion rescue package in 2017.

The banking environment is so strained that the European Central Bank (ECB) has had to take Banca Carige under its wings. The repercussions of this move could be dismissed because Carige is a midsize lender. Unfortunately, the bank’s take over by the ECB signals the first of many such occurrences.

Besides Italy’s abysmal 0.1% growth rate in 2019, the national debt is about 130 percent of its total GDP. That is about $2.6 trillion. The debt in Italy poses a systemic risk for the whole EU as a whole. The debt is not only weighing down banks in Milan and Rome only but has left a lot of European banks severely exposed as well.

France, for instance, is in for a massive €285 billion as per Bloomberg data.  Banks in Spain, Britain, Germany, and Belgium also have a lot of reason for worry. The EU has just barely moved on from what was its worst nightmare; the Greece Economic Crisis.

The rescue through austerity measures and bailouts constitute the largest ever-recorded financial rescue of a bankrupt nation. The Italian economy, however, is ten times larger than Greece’s.  To rescue Italy from bankruptcy would potentially drive the EU to the brink.

There has been the talk of the EU launching disciplinary measures against the Italian government for its breach of EU budget and debt deficit rules. There are however political repercussions to this move, because of Italy’s governing party anti-eurozone sentiments.

Italy is Europe’s third-largest economy and debt has an enormous impact on the broader European economic health. Should Italy exit the Eurozone, a possible default of euro debt in the billions would be chaotic, if not catastrophic for the European economy.

This bleak outlook, coupled with Brexit, the US-China trade war, and the ongoing economic global economic slump are signals of dark days ahead.

China Manipulating the Yuan and the Trade War

The US-China war has particularly taken a rather scary turn. In an August 5 tweet, the US President Donald Trump said, “China dropped the price of their currency to an almost historic low. It’s called “currency manipulation.” Are you listening Federal Reserve? This is a major violation which will greatly weaken China over time!”

Washington has been accusing China of currency manipulation for a long time. The latest weakening of the Renminbi, however, seems to be out of Beijing’s control. The Chinese financial system is firmly in the hands of its government. The nation’s leadership, therefore, has a degree of control over the Renminbi’s worth.

Current political and economic tensions have, nonetheless taken over and are dictating the value of the Chinese currency. Businesses and traders are increasingly getting unnerved by the East Asian nation’s economic slump and lulling stock market. The intractable trade war with the US and a fragile real estate market has quickly worsened the situation.

Inflation in China is ticking upward. All these bearish signals and rising prices are making the currency less attractive to hold. Beijing also has been propping up its economy, increasing lending, which has led to more Renminbi flooding the market. Consequently, the currency is weakening in value.

President Trump dislikes the idea of a weaker Yuan to the USD. When it comes to trade disputes, currencies can turn into potent weaponry. A weakened currency could give China an advantage in exports. China nonetheless has every reason to prop up its currency now.

While currencies can be weaponized, they are also very blunt in their operation. They have the potential of boomeranging against those that wield them. With a weakened economy to deal with the Chinese government is now primarily focused on domestic stability.

Nevertheless, the Trump administration is relentlessly stoking further tensions with China. Trump has vowed to impose trade tariffs on the bulk of Chinese consumer goods shipped to the US starting September and later, December.  Both economies could eventually snap under the trade war’s weight.

Globally, investors are spooked by the escalating conflict. As a result, the Dow and the NASDAQ are tumbling. Analysts say the tensions are slowly but surely driving the thriving US economy to a recession. This could be the first time that the States suffer a depression not due to monetary policy but due to trade policy miscalculations.

While most businesses in the North American continent would like China to play fair in trade, the use of tariffs to get concessions is beginning to concern them. The 10 percent tariff charge on Chinese imports worth $300 billion will significantly affect US households. In turn, the effect will be a drag on the economy.

The US Chamber of Commerce has warned that Trump’s retaliations “will only inflict greater pain on American businesses, farmers, workers, and consumers, and undermine an otherwise strong US economy.”

As the economy and the job market begins to cool off in the US, President Trump could end up carrying the blame for ending the US’s longest Bull Run in history. It comes as no surprise, therefore, that he held conference calls with the CEOs of the nation’s largest three banks.

Speaking to J.P Morgan Chase’s Jamie Dimon, Brian Moynihan of BOA and Michael Corbat of Citigroup, Trump sought a read “on the health of the US consumer.”  The three CEOs are reported to have responded that the consumer was well but asked the president to urgently resolve the US-China trade war conflict. The banking executives advised the president the war was damaging corporate capital spending outlook.

So, Why is Everyone Looking at Gold?

Morgan Stanley has issued a 10 percent retreat of US stocks. As marketing fundamentals continue to deteriorate, nervous investors are flocking to safe havens like Bitcoin and gold. Reflecting demand, the value of the precious metal has risen above the $1,460 an ounce, the highest it has been since May 2013. For obvious reasons.

Gold has high defensive characteristics, which makes it perfect for recession and inflation periods. A weakened USD is suitable for gold traders because the precious metal moves inversely to the green back. As the global debt hits the $244 trillion mark, according to data from the Institute of International Finance, central banks are ramping up, stocking gold.

It is the uncertainty from the ballooning debt that is now at least three times the size of the world economy that is heightening fear, causing despair. Intuitively, to cushion themselves from possible shocks, central banks and savvy traders are now stocking up gold, a trusted store of value, to stay protected in troubled economic waters.

About Novem Gold and the Ongoing ICO

Good news is that you can remain protected. You can trade in gold in various ways, but its trade does require validation of quality, ownership, and quantity stored. Novem Gold brings in that much-needed flexibility and value when it comes to investing in gold. We are the first global gold brand to empower investors from all backgrounds to safely and transparently invest in gold, aware that the asset is timeless. Besides, we are the first to launch such a project on the NEO blockchain.

With our bases in Europe, we seek to disrupt the trillion-dollar gold industry for your benefit. The objective here is simple and straight-forward: Leverage the blockchain and tokenize gold through the NVM, which is a utility token, or NNN–which is gold-backed and redeemable. This way we are literally changing the way gold is bought, sold and stored throughout the world.

To that end, our processes not only democratizes access to gold but provides security in trade as well. What’s attractive is that our operations make it easy to obtain your investment, giving you access to the ownership of LBMA-certified physical gold.

Presently, Novem Gold is crowdfunding through an Initial Coin Offering (ICO). The first phase ends on Sep 10, 2019 and during this period, each NVM will be sold at €0.55. In total, 180 million NVM tokens would be available for investors. That’s why there is absolutely no reason for you to miss out. In the first two phases, NVM tokens will be available at a discount. Don’t miss out on this grand opportunity. Be part of the process as we help you safely store your value digitally during these uncertain times.