Bitcoin is not Blockchain; Blockchain is so Much More. Here’s Why 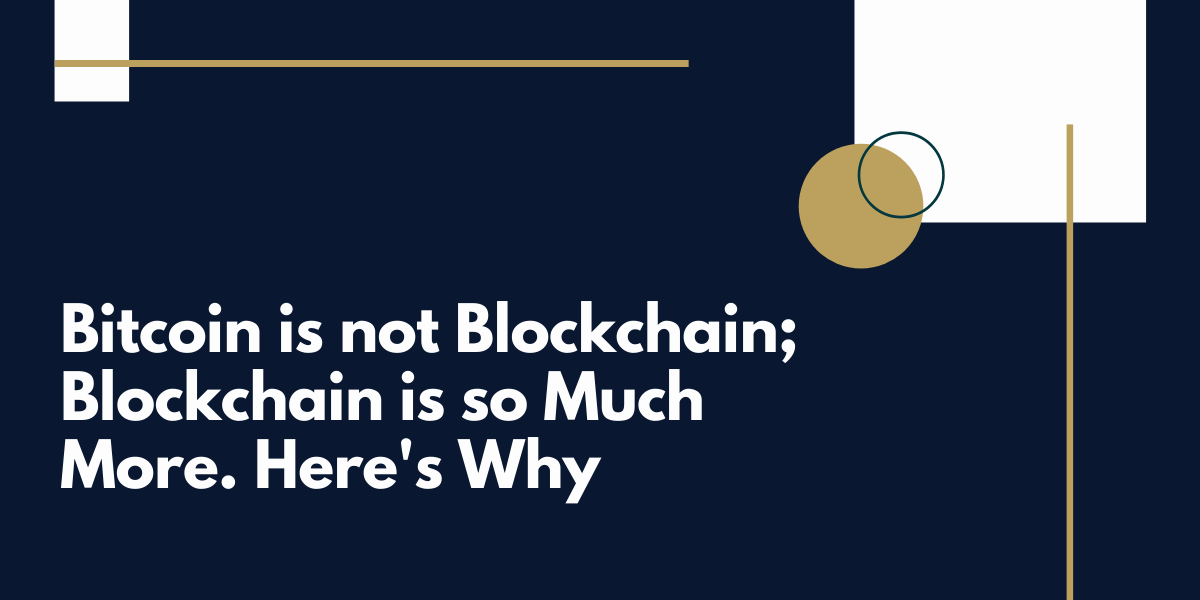 Bitcoin’s prices have spiked once more, as the US FED chair confirms that digital currencies are a real threat to the US dollar.

The price of the world’s most popular cryptocurrency soared above $10,000 after Jerome Powell said that blockchain technology was now a crucial development for the Federal Reserve (FED). He intimated that the FED had digital currency development in mind as an answer to China’s prolific developments in the digital currency sector.

The FED chair issued these statements to allay Congressman Bill Foster’s concerns that China was too invested in digital currencies, and the US needed to keep pace. The FED chair admitted that the central bank had a “lot of projects” in progress, a statement that was so well received by crypto enthusiasts that Bitcoin’s prices surged by 4% to $10,200. China has a lot of vested interests in digital currency development and is planning to use the technology in its Belt and Road Initiative.

Congressman Foster said that such developments could endanger the USD’s status as the world’s most popular reserve currency. By citing the FED’s interest in blockchain technology, the most powerful man in global finance put a spotlight once more on the highly debated blockchain and crypto markets.

Criticisms of these two technologies are usually lumped together while, in reality, both are very different. Virtual/digital currencies are not new phenomena; they have been in use since the invention of fantasy games. The creation of secure digital currencies was, however, a turning point in the development of these currencies.

The emergence of Bitcoin, from its creator Satoshi Nakamoto, was novel not because it was a virtual currency, but because this currency was counterfeit-proof. Even more interesting was that Bitcoin could prevent counterfeiting, a problem common with coins, and did not need government help.

Bitcoin, therefore, solved a unique challenge to digital currencies by showing that it was possible to trade them and stop users from spending a token twice. Satoshi’s unique anti-counterfeiting technology was blockchain. Blockchain is not Bitcoin, but a public online ledger that records Bitcoin transactions.

Blockchain is not Bitcoin

The blockchain network’s unique system is managed by a network of “miners” with computing systems that validate transactions. The validations prevent double-spending, and the miners receive payments of newly mined coins.

Bitcoin would not be what it is today without blockchain technology. Blockchain can be applied in diverse applications beyond digital currencies. Its blocks can store an array of information beyond financials. They can, therefore, be utilized in sectors such as retail, supply chain, electoral processes, and property exchanges, to name but a few.

A 2019 Deloitte research study – done on 1,000 businesses across seven countries – shows that many companies are innovating with blockchain. 34% of the survey’s respondents had blockchain projects, while 41% had established plans to go blockchain within a year. Another 40% of the businesses interviewed said that they were ready to invest $5 million in the technology in a year as well.

Blockchain is very beneficial to businesses. It can eliminate errors and improve accuracy without human involvement. It can also reduce verification costs by eliminating third party players whose expenses eat into a business’s bottom-line. Blockchain can also make transactions safer, efficient, and secure because any deal on it is transparent and decentralized.

Unfortunately, digital currencies – the face of blockchain – debuted as technical sophistication that was largely used to launder money and sell illegal products. Consequently, both cryptocurrencies and blockchain became the subject of attack not just by governments, but major investor influencers as well.

Warren Buffett, for instance, has referred to Bitcoin as “rat poison squared.” Jamie Dimon, CEO of JP Morgan Chase & Co, has also disparaged the technology calling it a “fraud.” Nouriel Roubini, also known as Dr. Doom, also attacked digital currencies saying that Bitcoin was an “overhyped” creation. He likened it to a “cesspool,” saying that the cryptocurrency will end up in a “museum of failed coins.”

Some of Bitcoin’s detractors have since come to their senses as the use case of the digital currency becomes even clearer. Dimon, for example, has recanted his earlier comments and said that blockchain is a real technology.

Large institutions that once looked down upon these innovations such as Citigroup Inc. and Goldman Sachs Group Inc. are now showing interest, investing in crypto infrastructure. Fidelity Investments has a digital asset management arm, while the government has clamped down on crypto fraud, which could help digital currencies shed their lawless image.

The Future Lies in Blockchain Development

There are two significant schools of thought revolving around blockchain development. One is focused on building tools that will positively transform business structures worldwide. The other would be restricted to the decentralization of finance as Bitcoin creators and enthusiasts envisioned it.

The need to free money from institutional and government control has led to a massive increase in cryptocurrencies, some of which completely misunderstand the unique role of Bitcoin. Many altcoins today have no real usage; while they have different levels of technical innovation, they lack the decentralization of Bitcoin.

Consequently, many of them do not have checks and balances to prevent system privilege misuse, which is often covered up with technical thresholds or glamour metrics. Ethereum might be an exception to the rule since it has established itself as a digital gas supplier for computing development.

It also has an organically grown, vibrant community and some levels of usage. Ethereum was key to the ICO craze, where blockchain was used to create platforms that eventually turned out to be massive pump and dump schemes. Little attention was paid to censorship resistance or privacy.

Today Ethereum is also contending for the money label, and its creator Vitalik Buterin supports this view, should the community choose it. Ethereum might enjoy the money label because it has many decentralized finance (DeFi) products dependent on it.

Should these applications want to use ETH, then the value will accrue to the digital currency. Andreas Antonopoulos, a famous Bitcoin advocate, says cryptocurrencies “attracts scammers, opportunists, pump and dumpers, and pyramid schemes, and the ICO market enabled a lot of those people to make their own coins.”

He says that most investors and speculators got into the market armed with very little knowledge. For this reason, a lot of good and naïve people have lost their life savings, giving the crypto community a negative persona.

Many investors have trashed blockchain because of this naivety. There are those, however, that have stayed because they understand that blockchain is not an investment opportunity as cryptocurrencies were advertised. Still, it is a technology that is changing the business landscape.

Novem Gold’s COO Fouad Soultana says that any cryptocurrency vying for Bitcoin’s place misses the whole point of digital currency creation and blockchain technology. Bitcoin has already solved the dilemma of safe digital currency use and has such a robust use case that it is regarded as digital gold. Currently, no other digital currency has attained this level of financial strength.

Blockchain is where the opportunity lies for all developers vying for a slice of the digital currency pie. Blockchain can be utilized to create new systems that execute smart contracts; automating payments, reducing discrepancies, and helping in resolving disputes.

It can also build supply-chain auditing programs such as the De Beers Diamond Company’s mine to customer blockchain-based tracing system. This program ensures that all their diamonds are conflict free. There are also diverse opportunities in the sharing of transparent and immutable records and proof of insurance systems.

The Next Recession May be Brutal: That’s a Net Positive for Gold and Bitcoin