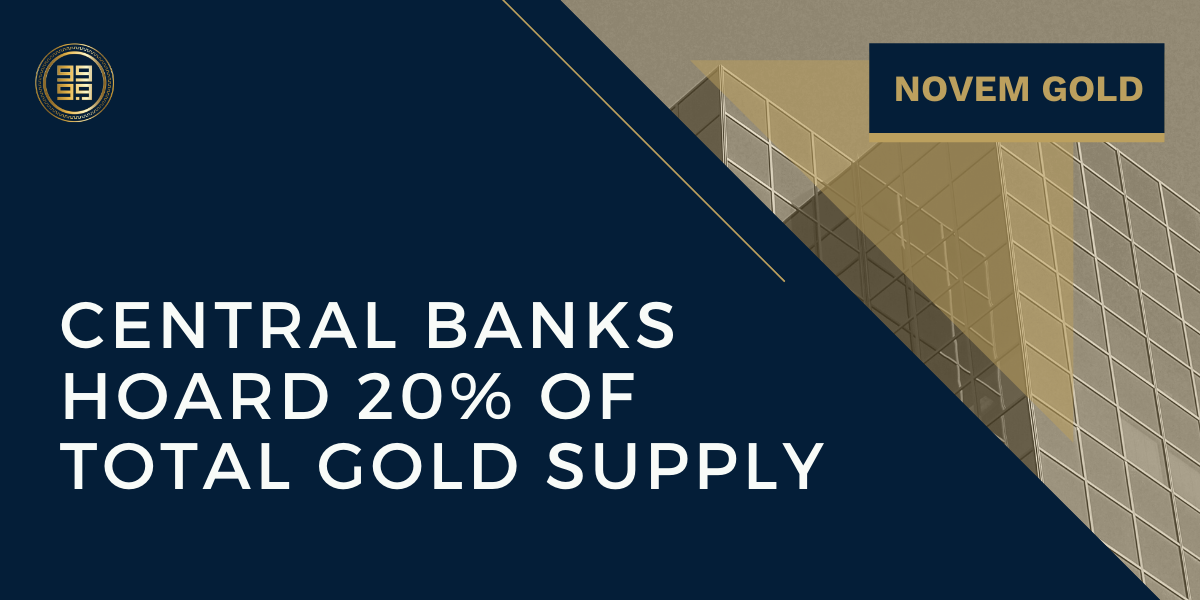 Central banks all over the world have been stockpiling gold bullion at record levels since the beginning of this decade. In 2018, central banks across the globe bought the largest amount of gold in 47 years, totaling 651.5 tons.

To put things into perspective, this is the largest amount of gold bought by central banks since the suspension of the gold standard in 1971. The only other year in recent history with such high levels of gold purchases was 1967. In that year, the amount of gold in reserve increased by over 1,404 tons.

Gold purchases have risen again in 2019. Data shows that central banks purchased over 156.2 tons of gold in the third quarter of this year alone. The leading buyers fuelling this gold rush include Russia and Turkey. In August, for example, Turkey bought 41.8 tons of the precious metal.

The Middle Eastern country is now the world’s largest buyer of gold in Q3 of 2019, hauling in 71.4 tons of gold. The Central Bank of the Republic of Turkey now has 385.5 tons of gold in its reserves.

Russia’s de-dollarization efforts have also come to the fore as Moscow adds more gold bullion to its reserves. In August, the Central Bank of the Russian Federation bought 34.9 tons as it diversifies its reserves and cuts down on its dollar dependency. China also purchased 21.8 tons of gold in the same period.

It is estimated that these increased purchases of the precious metal by central banks have now absorbed over 20% of all the gold mined globally. The banks’ preoccupation with gold is slowly becoming public knowledge and is raising many questions, the most important of which might be: Is there something these financial experts have foreseen that the ordinary investor hasn’t?

Gold Could Rise Higher in 2020

When the Great Recession hit central banks, by virtue of their unchecked power, took to massive money printing to jumpstart the economy. Gold prices during that period remained subdued, but the trend has changed as central banks turn back to buying gold for its overall value stability.

Germany, for instance, bought gold for the first time in a century this year. Notably, even banks in European nations like Hungary and Poland – not known to be particularly bullish for gold – have added more gold to their reserves.

Hungary, for example, has abruptly increased its gold reserves by 1000% after three decades of zero gold purchase activity. The central bank of Hungary (the Hungarian National Bank) added 28.4 tons of gold to its stores, increasing its reserves from a low of 3.10 tons to 31.5 tons. The Hungarian government has also repatriated its foreign-held gold reserves from London to Budapest.

Poland, Hungary’s political ally and neighbor, has also shocked the European Union by announcing that it has added over 100 tons of gold to its reserves, and now has 228.6 tons at the Bank of England’s famed vaults. A repatriation process of 100 tons of Polish gold held in London back to Warsaw has nonetheless come to completion in a top-secret mission that covered eight flights between the two countries.

This increased global appetite for gold, set to reach a five-decade high in sales in 2019, means that gold prices could rise much higher in 2020. Credit Suisse’s latest prediction that the Federal Reserve could launch another wave of quantitative easing rounds makes higher gold prices even more likely.

According to Zoltan Pozsar, the Swiss multinational investment bank’s managing director, the Fed could print more money shortly as problems in the lending markets escalate and call for a more aggressive stance.

The Switzerland-based financial services firm’s leader told his clients: “If we’re right about funding stresses, the Fed will do QE4 by the end of the year. Treasury yields can spike into the year-end, and the Fed will have to shift from buying bills to buying what’s on sale–coupons.”

The digitally created funds would bridge the glaring fund gap that has left banks scrambling over scarce funding reserves. If Pozsar’s prediction that the Fed’s current repo rates operations are not adequate for growing banking sector liquidity demands, a new round of QE implies lower interest rates.

Gold and interest rates are negatively correlated, and the value of the precious metal is bound to rise higher with falling interest rates. The banking sector of some of the world’s most significant economies is in disarray, and the global population’s trust in the current financial system is on shaky ground. Gold has, therefore, become an alternative haven for wealth.

This increased interest in the precious metal has also brought back the nostalgia of the gold-standard era. Are central banks adding more gold at unprecedented levels to move away from the USD and return the global financial system to a gold standard?

Less than a decade ago, a survey done among leading economists waved away the whole idea of a gold peg, saying that the benefits of the system could not match its disadvantages. Are central bankers disputing the sentiments of leading academicians in the economic sector? Is it possible that gold is overshadowing digital currencies popularly viewed as the next transition in the evolution of money?

Notable economist Lawrence H. White, writing in the Cato Journal, says that a new gold standard for the world is a possibility. The financial system could nurture a gold standard parallel to the current fiat system. One other option is the setting of a transition date where money assumes the value of some amount of gold. The latter process, White says, offers a much smoother transition and would minimize the high inflation that would occur as fiat loses its value.

To counter deflation or inflation, the economist says that the new amount of money would need to assume the current prices of the precious metal. If central banks were to adopt White’s model, then gold would still keep rising in value.

Fears of an Oncoming Recession

A more plausible suggestion, however, is that central banks know that the US economy is on the brink of a recession and are purchasing the precious metal as a hedge. President Putin of Russia, for example, has said that his country’s gold purchases were a “fiscal fortress” policy.

Unfortunately, the USD takes center stage in global trade dealings and is a base for most global currency exchanges. The pain of a US recession is therefore bound to reverberate globally in integrated economies. This effect is regardless of any countermeasures other central banks may put in place.

This integration is the reason the ripple effects of the Great Recession resounded in all corners of the globe. China and Russia have increasingly shown their discomfort over this situation. As an illustration, China has asked the IMF to put a safer global reserve currency in place – a call that has thus far fallen on deaf ears.

It is therefore not surprising that both China and Russia are leading the gold purchase bandwagon. They appear to have chosen to deal with the problem directly and safeguard their economies by investing in the original reserve currency of the world: gold.

There is no better way for both countries to fire a warning shot at the US given its propensity for war. The US has, over the years, heaped sanctions and escalated trade wars on its economic and political competitors as leverage. The game theory states that threats or promises are harmless; a credible strategy such as accumulating gold, however, is a costly but reliable signal.

Governments fed up with the US’s hegemony could signal that they are getting ready to drop the USD, which would adversely affect the exorbitant privilege the US currently enjoys.