China Suspends Short Selling to Inject $173.8 Billion for Liquidity: What it Means for Gold 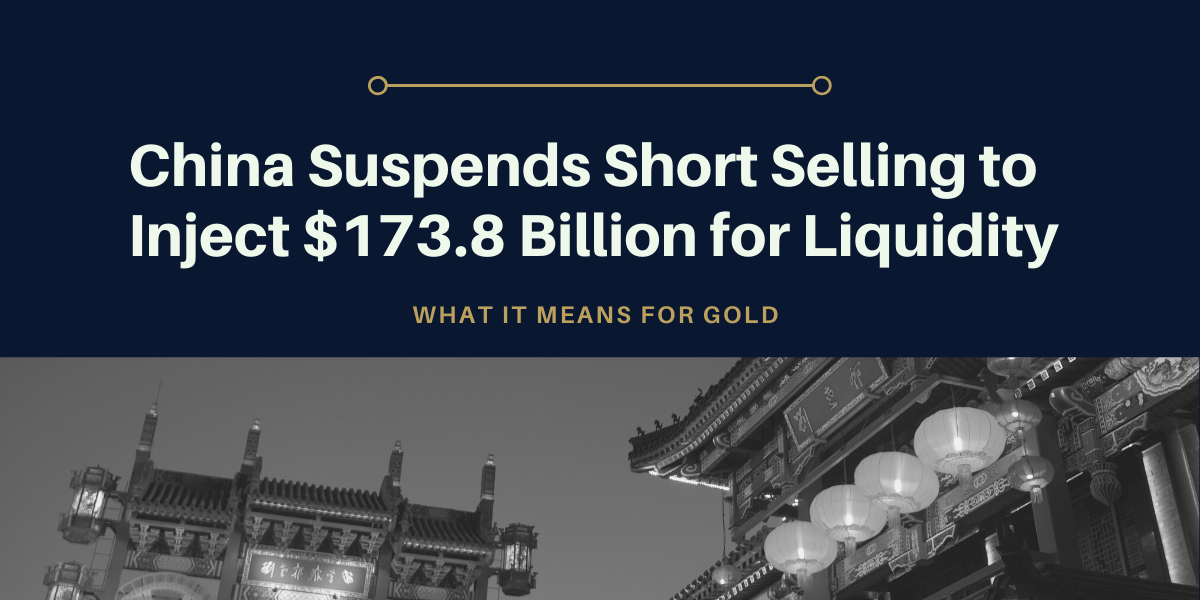 When China went on the Lunar New Year holiday last month, its onshore markets were already looking bleak. On Jan 23, for instance, the Shanghai Composite Index sunk by 2.8%. Businesses, therefore, awaited the resumption of trade on Feb 3 with a lot of anxiety.

As expected, the stock index market plunged on its first business day of the year, hitting its lowest level in the last 13 years of trade. The risk sentiment caused a stock index plunge of 9.1%.

The largest losers were financial, consumer, and transportation stocks such as China Eastern Airlines, Tsingtao Brewery, and Citic Securities. The yuan also fell below seven as the Chinese markets displayed their initial reaction to the coronavirus pandemic.

The Chinese government had prepared for this eventuality. The Chinese central bank made a promise to add 1.2 trillion yuan to the markets a day before the stock market opening.

The People’s Bank of China (PBoC) would buy short-term bonds to support the bank’s lending ability. As a result, the banking system would have increased liquidity and render a level of stability to the currency markets.

Besides injecting cash into the fiscal system, government officials had additionally appealed for calm among investors. The appeal did not have the expected effect because, on the opening of trading, investors dashed for an exit, pushing the stock markets to new lows.

To ward off the panic-selling of stocks, the Chinese government has not only started quantitative easing measures but has also suspended short selling.

The China Securities Regulatory Commission (CSRC) has stopped proprietary traders from net selling as the market finds its footing this week. Consequently, brokerages have only been selling to fulfill investor redemptions.

The securities regulatory body has also temporarily halted securities lending, one of the most popular short-sell options in China.

Shanghai WuSheng Investment managing director Fang Rui, commenting on this development, said, “A lot of people in the market have not been through situations like today, and you can’t blame people for wanting cash when they feel like their health is at risk.”

Explaining the dire situation that the Chinese stock investors are facing, he adds, “There’s not a lot we can do today; we are already very heavily exposed with minimal remaining funds to use to buy.”

It remains apparent to many investors that China’s economy will pay a considerable price for the extended business downtime. Most analysts believe that the pandemic will imprint a long-term effect on the economy, implying that the stock market will suffer losses for a long time too.

It is already very difficult to trade stocks during the ongoing pandemic, mainly because no one seems to know when the epidemic will end.

Li Shuwei of Beijing WanDeFu Investment Management Co. said, “It’s too early to buy stocks right now, and it’s also difficult to sell as all shares are limited. So I will just have to wait and see.”

The Chinese stock market is mostly retail-investor dominated. Most of its investors, albeit wealthy, are not as professional as institutional investors. The large group of investors owns over 80% of the Shanghai market’s A-shares, meaning that fear can harm stock values.

The US stock market, in contrast, is upheld by less sentiment, since it has more algorithmic traders and large institutions in it. The massive selloffs witnessed at the commencement of trading shows that anxiety and fear are high in China.

Amid the adverse reports there are stocks from some sectors that are still performing well. Construction, real estate, and manufacturing stocks have lost their value, but healthcare products’ business stocks have risen by 10%.

The pledge made by the authorities has paused the trajectory of gold, causing the precious metal to retreat from its four week high.

A stronger USD market also held back bullion while spot gold had a 0.4% plunge to a $1,582 per ounce price.

US gold futures also fell by 0.6%, closing the day at $1,578 per ounce. The injection of fresh, easy money into the hard-hit Chinese bourse lessened performance pressure on the indices, pushing investors into the riskier assets.

The Chinese government has taken extreme measures against the spread of the virus, a factor that has strengthened market sentiment. Beijing’s lowered interest rates and liquidity injection have led to the dollar’s gain by 0.4%, making gold more expensive to purchase in other currencies. The precious metal is a very popular asset in China, and has been used as a store of value in times of financial and political uncertainty.

Its market has been on a rally as the fears of an on-coming economic growth slump boost investors’ appetite for it. China is the world’s largest importer and miner of gold.

In December 2019, the imports of gold into the East Asian country tripled from November values. The virus has nevertheless adversely affected physical gold trading in most Asian markets, reducing demand.

Economic analysts have said that the yellow metal’s rally will probably be in a short pause mode as central banks globally rally around China to thwart the virus’s effects on their economy.

The Wuhan virus continues to ravage the world’s second-largest economy, with a massive 86 fatalities occurring Feb 7.

772 people have so far succumbed to the pneumonia-like illness, and 34,546 others are infected. There are now reported fatalities of other nationalities besides the Chinese. A man in Hong Kong and a Chinese citizen in the Philippines fell victim, and the virus has been reported in 27 countries, infecting 320 other people. To stop the spread of the virus, entire cities in Hubei have been quarantined.

Over 60 million Chinese citizens are also under travel restrictions. The government has banned public transportation, train stations and roads have been closed, and flights have also been canceled.

Gold Will Still Rise if Virus Spread is not Halted

A massive chunk of the East Asia country is in lockdown, and many of its provinces have announced a holiday extension. The over week-long holiday extension is meant to boost the country’s efforts at halting the spread of the novel coronavirus.

Over 14 cities and provinces are waiting until the second week of this month to resume business. These large economic hubs account for close to 69% of the nation’s gross domestic product.

They include the vital manufacturing eastern provinces of Guangdong, Shanghai, Jiangsu, and Henan. Jiangsu is Nike shoe manufacturing ground, while Henan, in central China, has a Foxconn iPhone plant. Shanghai boasts the country’s largest port, while Shenzhen in Guangdong is China’s most prolific tech city.

The holiday extensions have further disrupted logistics and supply chains, making the severity of the ongoing virus attack more severe for the country’s economy.

Large corporations like Starbucks and Toyota have also shut down their operations in China, while global airlines have suspended flights into the country.

Since the reopening of the market and the central bank’s move to add liquidity to the system, there is not much more market data available to predict the performance of China’s bourse.

Many analysts, nevertheless, believe that the effects of the government’s interventions on the stock market are short-lived.

AxiCorp’s chief market strategist, Stephen Innes, said, “Once we get through this ‘Band-Aid effect,’ the reality will set in that there is an economic tumult about to happen in China, which will spread globally and force a lot of central banks to cut rates.”

Research houses have already slashed the growth forecasts for the country in this year’s first quarter. If the spread of the virus is not halted fast, it is highly likely that investors able to get out of the stock market will once more focus on gold, pushing its rally to higher levels.

Pure Gold: Which is worth more: yellow, white, or rose gold?