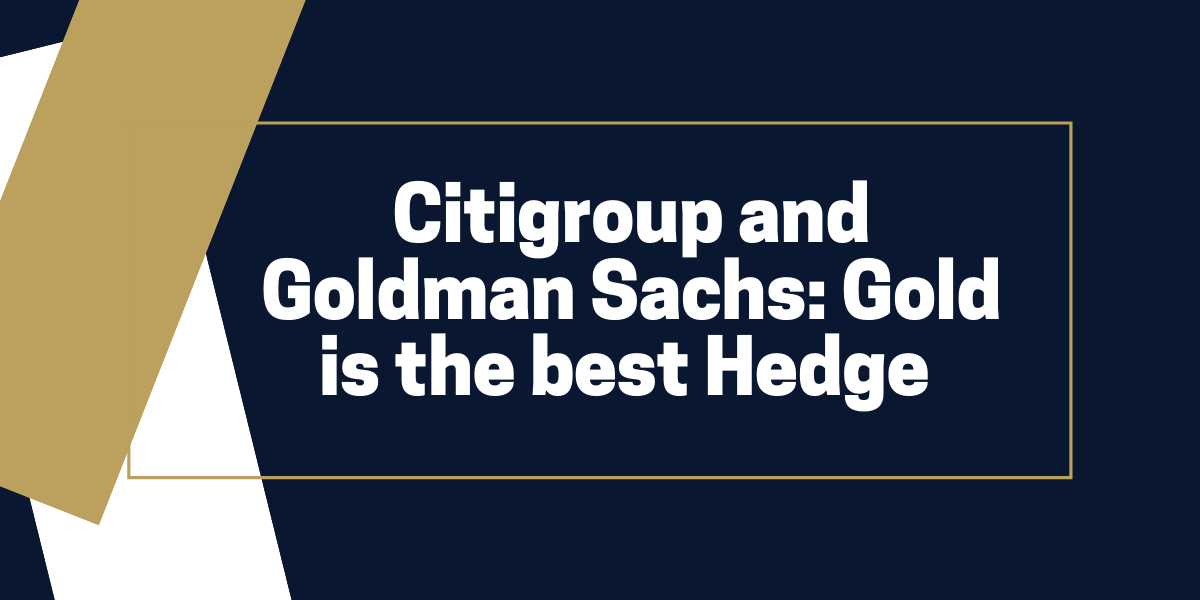 Goldman Sachs and Citigroup rank gold as the best asset to hedge during periods of geopolitical uncertainty. In their assessments, gold is a better safe haven and hedge than oil, the “black gold.”

The escalation of US-Iran tensions in the past week has been a source of anxiety across the world. In economic circles, investors are wondering how badly these tensions will affect the global economy.

Goldman Sachs already had an excellent outlook for gold. The prominent investment bank maintained their three-, six- and 12-month forecasts for gold at $1,600 per ounce. This mark is higher than current gold prices and indicates its favorability as a hedge over oil investments during geopolitical uncertainty.

In a note, Goldman Sachs explained their rationale:

“The range of potential scenarios is very large; spanning oil supply shocks or even oil demand destruction — which would be negative to oil prices … spikes in geopolitical tensions lead to higher gold prices when they are severe enough to cause currency debasement.”

‘’I think there is more upside to gold, partly to do with the tensions in the Middle East.’’ He further added, ‘’I think it is a nice hedge to have.’’

These banks have tremendous experience in investment circles. Their assessment confirms existing assumptions on the behavior of gold during geopolitical turmoil. Depending on how badly the conflict escalates, the Goldman Sachs outlook for gold at $1,600 in the near term may be a conservative estimate.

The Escalation in Geopolitical Tensions

The decision by the Trump administration to assassinate Iran’s top general Qassim Selemani was a political curveball few expected to start the new year.

Currently, Iraq looks to be the proxy battleground for this escalating conflict. President Trump has vowed to ignore the Iraqi parliament’s decision to expel American troops from the country.

This vow includes the threat of sanctions on Iraq. The presence of US forces in Iraq is of strategic importance to the US military, given that the world’s premier superpower is all but at war with Iran.

Iran is vowing harsh retaliation for its loss. The attack on a US military base will likely not be the last act in this effort. These tensions have led to the highest gold prices in almost seven years, with Trump showing no interest in deescalating the conflict, especially if Iran retaliates further.

As if the US-China trade war wasn’t bad enough, this escalation provides yet another problem for the global economy. The former dispute is yet to reach a complete resolution, but its effects will pale in comparison to the latter, especially if it escalates to a full-blown regional conflict.

Why Gold is Better Than Oil

Oil prices are also up considerably after the escalation. The price of one barrel of Brent crude recently pushed the $69 mark, but has since lost some of those gains. However, oil is historically an unreliable investment. During the fracking boom in North America, prices hovered at around the $30 mark.

Despite the Iranian strike on Saudi Arabia’s oil fields last year, there is no indication yet that Iran will strike strategic regional oil fields as part of its retaliation strategy against the US.  However, how this unfolds remains to be seen.

Even though oil is a non-renewable energy product, the market has the impression of unlimited supply. The US no longer has to import oil, while Iran is sitting on billions of barrels of unexploited reserves.

This differing supply is where gold has the edge over oil. Currently, gold is at its most overbought levels in recent times. Central banks’ demand for gold in 2019 was at record highs. Countries like Russia, China, and Kazakhstan are leading forces in this drive.

Therefore, gold has the image of a scarce, valuable commodity. Finding new gold reserves is a tough task, and there is no possibility of a gold glut in the market.

The World Gold Council (WGC) has figures that show that the discovery of new gold mines is down in the last 30 years. Therefore, investors looking for a safe-haven and not merely speculation have a clear choice between the two.

Gold in Times of Geopolitical Turmoil

In comparison to other assets, gold has had consistent growth margins in the past year, and the past two decades in general. These tensions may have been a boost for gold prices, but even if they dissipate, any reduction in gold prices won’t be as dramatic as those for oil.

Therefore, bullion has better standing as an alternative investment during times of political and financial uncertainty. A full-blown war has the potential to lead to currency debasement, which would be lucrative for gold holders.

As part of the latest rally, gold crossed the $1,580 mark and looks to remain over the $1,550 mark as more updates on the turmoil continue. This mark is a decent return for the year already. Gold was one of the best performing assets around in 2019, with an appreciation of about 18%.

As such, gold has once again affirmed an established trait of the yellow metal: it is the asset investors flock to during uncertain times.  Whether it was during the 2009 financial crisis, low-interest rate cycles, and even currently with more geopolitical tensions, gold has distinguished itself as a stable store of value (SOV) asset.

Other Factors Behind High Gold Prices

Even before the severe escalation in geopolitical tensions, gold prices were at a pretty high level. Gold had one of the best years in recent memory last year. The primary cause for the latest rally is the low-interest rate policies of most major central banks around the world.

In its last meeting of 2019, the US Federal Reserve (FED) confirmed that it would not be raising interest rates in the short term. This news confirmed what many analysts expected, given the high-profile attacks President Trump has aimed at the institution in recent times.

Federal Reserve chair Jay Powell came under Twitter criticism last year for hesitating on rate cuts. Trump is keen on keeping economic growth impressive for as long as possible. In a reelection year, there is little possibility that there would be a policy change to this effect.

Low interest rates provide cheap liquidity in the economy. This policy came to the fore at the height of the financial crisis of 2008 and has lingered ever since.

During such a period of fiat glut, gold is a more attractive investment for investors looking to store value. This dynamic is why gold prices went near the $2,000 an ounce mark at the height of quantitative easing in 2011.

Furthermore, countries like Russia are looking to add to their gold reserves. Gold is an asset to diversify and reduce dependency on the US dollar in trade and currency reserves. Countries like Russia and Turkey have stuttering currencies because of political and economic tensions that have devastated their economies in the past decade.

These factors, and more, create a confluence of events that boost gold prices. The US-Iran trade tensions are the latest addition to this equation.

2019 went remarkably well for gold, and 2020 has started even better. As one of the world’s oldest traded assets, gold has both the reputation of stability and a track record of weathering all kinds of storms. Recent evidence suggests that it weathers the storms better than most other assets.

During periods of crisis or impending wars, gold is a desirable asset. Whether by investing directly in gold bullion, gold Exchange Traded Funds (ETFs), or digital gold tokens, investors can’t get enough of this asset. It is fair to say that these are the golden years for the world’s premier precious metal.

In the past, some investors have derided gold because it does not have periodical yields like stocks. However, in a crisis, mainstream assets have minimal to negative returns. The case for gold is based on its consistency, stability, and ability to appreciate when other assets are stuttering. In the past week, this edge has been evident.