Currency Turbulence on the Horizon: Why You Need to Stash Gold 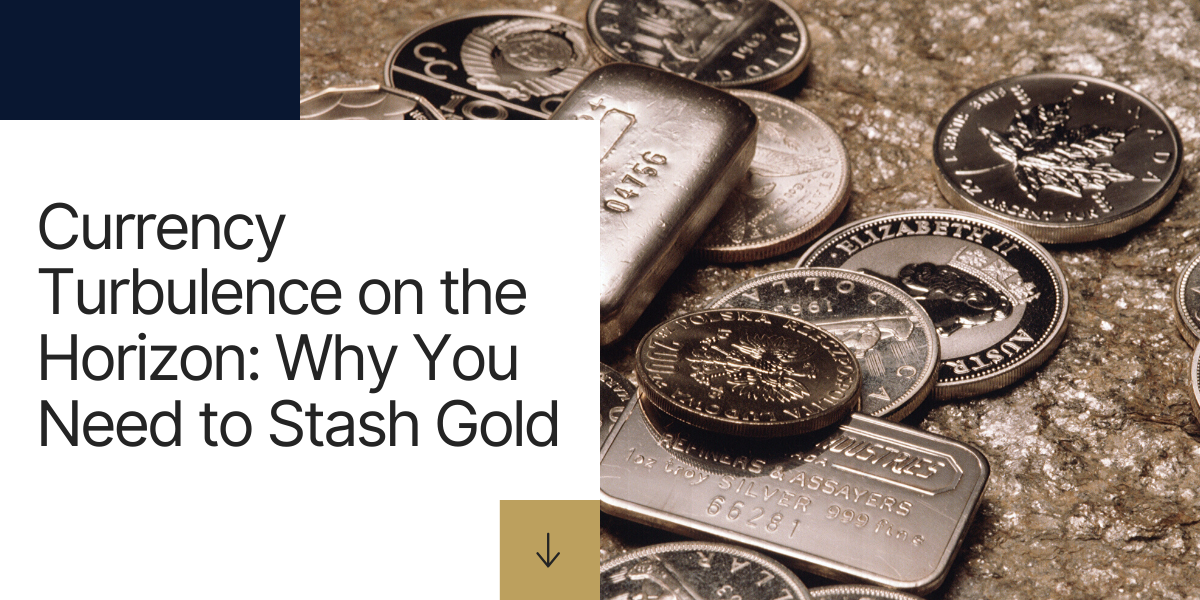 The weakening US dollar is now a hot topic, and people are slowly beginning to understand the effects of inflation. The older generation keeps talking about how much more one could get with a dollar relative to what the currency can do today.

Most people take comfort in the fact that while the USD can no longer buy as much as it used to, it is still relatively more valuable than many other currencies. The health status of the USD is, for instance, incomparable to what has become of the Iranian rial. One USD is worth 42,105 rials, despite the Western Asian country’s vast energy resources.

The Middle Eastern country is an energy superpower and plays a vital role in the petroleum industry. Iran sits atop 13% of the world’s oil reserves. In 1979, one US dollar was worth 70 rials. Factors such as the Islamic revolution that caused a capital flight from the country ate into the value of the currency so that by 1999, 9,340 rials were worth a dollar.

The state, however, had the option of directing its oil revenues into its National Development Fund to boost its economic competitiveness. The currency is tightly under the grip of the Iranian central bank, and the country’s vast energy wealth is also state-owned.

Running alongside this narrative of Iranian political and civil instabilities and their effects on the rial is another, more ominous, factor — the USD’s hegemony status. The rial has had to endure decades of US sanctions.

Former US President Carter’s government was the first to slap the country with Executive Order 12170, which froze over $12 billion worth of Iranian assets. There is a contention that much of this wealth is still unavailable because of unresolved legal claims.

In 1996, the US signed the Iran and Libya Sanctions Act (ILSA), which later mutated into the Iran Sanctions Act (ISA) in 2006. In 2013, the US House of Representatives voted to increase sanctions against the country.

The Weaponization of the USD

The currency hit rock bottom when US President Donald Trump exited the two nations’ 2015 nuclear agreement. The re-imposition of the sanctions so adversely affected the already weakened state of the Iranian economy that the currency has lost 75% of its value since 2018.

Because of these sanctions, global companies no longer do business with Iran, and the lack of foreign exchange has led to a liquidity crunch. The slew of sanctions has strained the Iranian banking system, and the country’s energy production has also been adversely affected. The US sanctions were aimed at ensuring that the Western Asian country does not fully enjoy the vast resources it holds.

The US has, for decades, brandished the strength of the dollar and used it as a weapon against its opponents. President Trump’s administration has not gone to war with any country as his predecessors have, but he has perhaps relied on sanctions more than any of them did.

He has not only made many enemies but has also incensed the US’s close allies as well. These same allies are responsible for the strength of the USD, seeing it as a “reliable steward of orderly global markets.”

Republican Senator Marco Rubio says this misuse of the USD’s power “could accelerate a trend in which other countries wish to reduce their reliance on the dollar for its main three purposes — as a store of value, a unit of account and a medium of global exchange. In the very long run, some specialists fear the US dollar’s totemic status at the center of the global economy could be eroded, or even supplanted, just as the British pound was by the dollar during the interwar period.”

The US as a Banker of the World

A large part of global trade is locked and even denominated in USD. Still, if the country continues to disrupt its trading, financial, and economic connections as President Trump has been doing, the currency’s coercive leverage will diminish.

The United States is a banker of the world. Their currency plays a unique role in global finance and therefore has, for decades, borrowed for the short term from the rest of the world at low interest rates. In turn, the US can invest these finances internationally in riskier long-term assets that give the country superior returns. It has therefore issued liquid and highly safe investment assets such as commercial paper and treasury bills and invested the monies into highly performing physical capital and stocks worldwide.

Consequently, the US balance sheet with the other countries resembles that of a bank. Globalization has also been very good to the dollar, making the US an even more prominent banker to the world. As an illustration, the rapidly expanding economies of India and China have turned to the US financial system in the absence of a native store of value.

Because of its past relatively stable governance and its ability to produce massive amounts of safe assets, over the years the US has reaped “exorbitant privilege” from its greenbacks. Consequently, events like the Great Recession, slow economic recovery, geopolitical crises, and epidemics have all heightened the clamor for US safe-haven assets, which strengthens the currency.

US President Donald Trump has decried the dollar’s strength and attacked the FED for failing to lower it. He has even accused China of manipulating its yuan to keep the dollar robust for trade advantages. The USD is, however, overvalued because it is the world’s reserve currency, and the US is a significant source of safe assets. In the absence of these virtues, there is not much else holding up the dollar’s value.

In 2002 Ben Bernanke said, “Like gold, US dollars have value only to the extent that they are strictly limited in supply.” He also added that the currency would never enjoy limited supply because of the manipulative functions of the US Federal Reserve.

“The US government has a technology, called a printing press (or, today, its electronic equivalent) that allows it to produce as many US dollars as it wishes at essentially no cost. By increasing the number of US dollars in circulation, or even by credibly threatening to do so, the US government can also reduce the value of a dollar in terms of goods and services, which is equivalent to raising the prices in dollars of those goods and services.”

Bernanke then concludes by saying that a fiat-based system in the control of a government will always increase inflation due to high spending.

Massive Loss of USD Value Because of Quantitative Easing

Despite penning these very revealing statements, Ben Shalom Bernanke served his two terms as FED chair from 2006 to 2014.

In the 2015 memoir of his tenure at the helm of the central bank, The Courage to Act, the American economist confesses that the global economy would have collapsed in 2008.

He says that the efforts of the FED saved the day and halted what would have been a greater catastrophe than the Great Depression. The FED took some unorthodox measures. First, they lowered interest rates from 5.25% to 0.0% in under a year.

When this did not mitigate the liquidity crisis, the FED started its massive quantitative easing program. Between 2008 and 2010, the central bank printed an extra $1.3 trillion and purchased government and bank financial assets with it.

The biggest criticisms of Bernanke are his willingness to bail out Wall Street at any cost, and the massive amounts of cash that he injected into the banking system to boost economic recovery.

The once outspoken critic of the central bank’s monetary manipulation quintupled the USD supply during his tenure, hyper-inflating the currency’s supply. Consequently, the FED chair speeded up the dollar’s downward trajectory towards worthlessness. Most central banks understand that a disaster is pending due to an overreliance on a worthless asset and are building up gold reserves as a hedge for when the storm hits. The last economic crisis created by banks has only made the wealth gap wider.

Banks have been the beneficiary of the disasters they create, vacuuming up personal wealth and hard assets by hoodwinking the public with worthless fiat.

They are now mopping up gold, an act that seems to happen every time a crisis is around the corner, as evidenced by central banks’ gold buying efforts of the late 20s, 30s, 80s, 2002, and 2012. This is another reason to mirror their steps, and stash more gold.