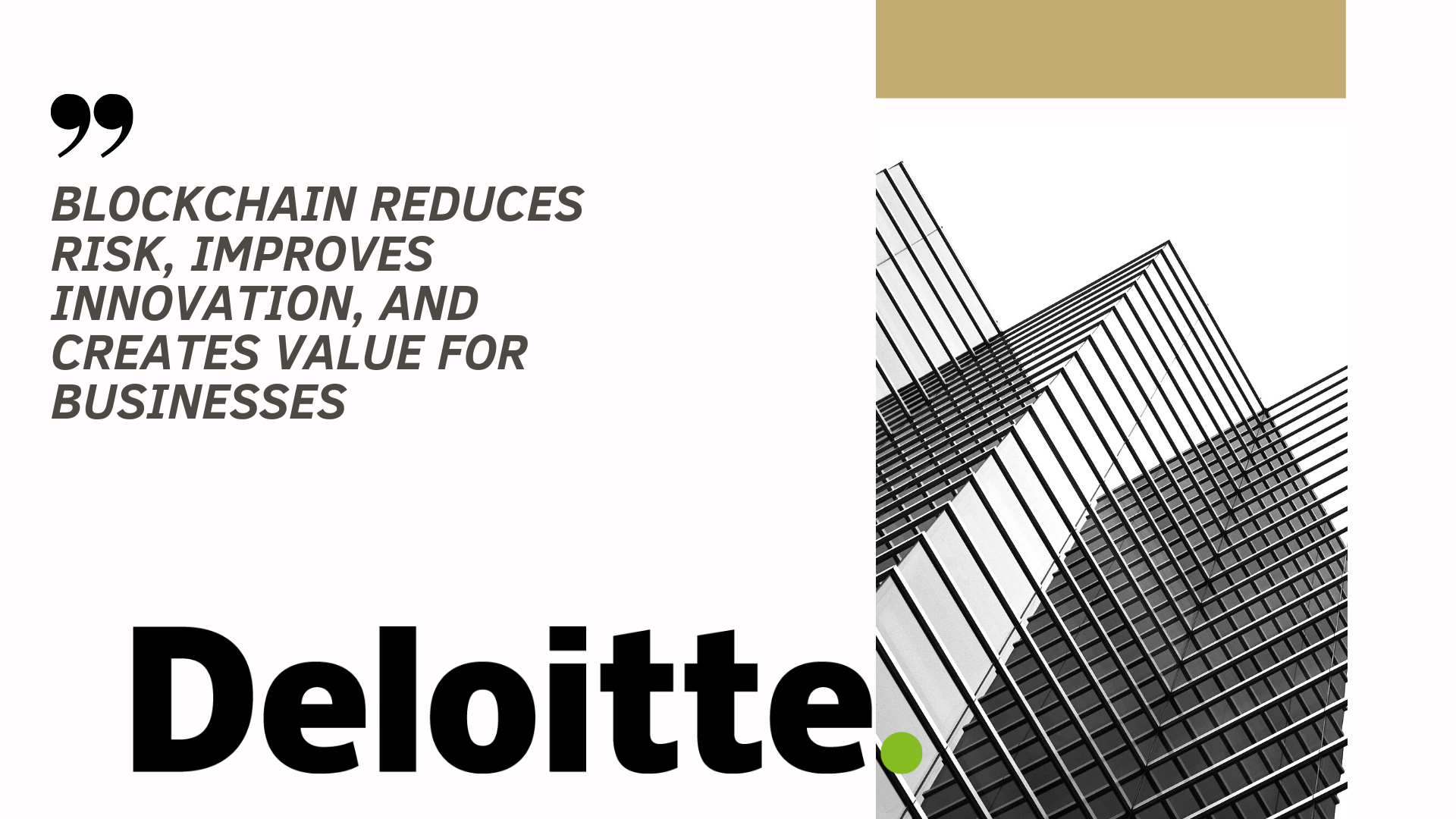 Global accounting powerhouse Deloitte has released a report showing the growth and dynamism of blockchain technology. The findings follow a survey of leading executives in a dozen countries conducted in February 2019.

Blockchain technology has had an exciting evolution. Currently, many companies are looking for ways to implement blockchain transparency and immutability in their operations. Accordingly, the blockchain is moving from the fringe entity it was previously to now being front and center in corporate strategies.

Cryptocurrency is generally a massive success story. However, leading coins like Bitcoin have had their fair share of highs and lows in recent years. This kind of inconsistency tends to put off certain types of investors who are sticklers for stability.

Slowly but surely, blockchain technology is distinguishing itself for its utility value. The fates of crypto and blockchain technology no longer appear to be as intertwined as it seemed at their inceptions. Even governments like China, which have stringent regulations on cryptocurrency trading, are now actively researching distributed ledger technology (DLTs).

The uncertainty about the viability of blockchain technology is decreasing. Leading executives acknowledge that the technology is real and that blockchain solutions can be part and parcel of their future business models.

As per the Deloitte report, 53% of executives see blockchain technology as a critical part of their business in 2019. This figure marks a 10-point increase from last year. Even more important is the fact that there is a 40% rise in executives willing to invest $5 million or more in new blockchain initiatives over the next twelve months.

Over time, blockchain technology has displayed impressive diversification in its use-cases. The practicality of its solutions, especially in supply chain and data management, continues to draw accolades. This level of depth and maturity has won over industry leaders from various sectors.

Still, the level of actual deployment does not tally with the enthusiasm around blockchain. With every innovation, potential adopters display a reasonable level of skepticism about long-term viability. Among the executives, a significant 43% think that blockchain technology is overhyped. Therefore, it is not uncommon to find some of these executives full of praise for blockchain but still hedging until they see more development.

Various industries have seen blockchain utility causing an immediate impact. Fintech is a leading success story from the blockchain age. Combining artificial intelligence and the transparency of blockchain has resulted in Fintech startups that can become the next Silicon Valley unicorn.

The bottom line is that an overwhelming majority of respondents view blockchain as broadly scalable and believe that it will eventually achieve widespread adoption. A compelling business case for blockchain is a prerequisite for such sentiment. This sentiment is proof of blockchain’s maturity and resilience over the years.

Existing concerns range from replacing or adapting current legacy systems to regulatory hurdles, and even uncertainty about return on investment. Going forward, it will be fascinating to see what the skeptical executives in particular think of the innovation.

According to the Deloitte survey, most respondents see potential upsides in business model/value chain innovation as some key blockchain advantages. Blockchain technology continues to distinguish itself. With the introduction of smart contracts in 2015, blockchain is now a treasure trove for developers.

Decentralized applications (dApps) are a dynamic tool to create trustless transactions. Going into 2020, LinkedIn’s 2020 Emerging Jobs Report finds that the job of a blockchain developer ranks high on the list of top emerging jobs alongside others like A.I. specialists and robotic process automation consultants.

As such, blockchain is set to become one of the hottest fields next year. Whether as a developer, investor, or casual participant, a lot is going on for everyone.

Much of the skepticism around cryptocurrency stemmed from the fact that governments across the world sought to either ignore or regulate this field in a pessimistic manner. The fact that China is now warming up to DLTs could be a sign of the changing times.

Government adoption of blockchain can be another watershed moment for this innovation. With possible applications in areas such as healthcare and supply chain management, this technology could genuinely explode.

India is yet another country with a strict policy on crypto trading. The India Times reported on Nov. 27, 2019 about an exciting development relating to DLTs: India’s Ministry of Electronics and Information Technology intends to embrace blockchain technology, adopting a national strategy.

India and China’s evolving attitudes are a testament to the resilience of the blockchain. India has banned crypto trading for sovereignty reasons, volatility, and its inability to serve the functions of regular currencies.

The move to embrace blockchain technology might have the domino effect of a change in attitudes towards cryptocurrency. Institutional investors, in particular, are keen to be on the safe side of regulators.

Western governments led by the USA have to take a more assertive role in the development of this sector. If the likes of China take a leading role in moving blockchain forward, it is only a matter of time before the rest of the developed world follows suit.

Countries that have a blockchain-friendly environment include Estonia, Malta, Switzerland, the USA, China, and the U.K. This list is from a Consensys research report published in November 2019. These countries have different levels of blockchain implementation in the government and public sectors. Estonia was the first country to implement blockchain at a national level, with blockchain testing going as far back as 2008. Malta is also an important blockchain hub, given its suitable regulatory regime.

The Importance of the US Market and Blockchain Adoption

Because of its economic size, the USA is a very consequential market for blockchain technology. Government adoption is already impressive. For example, the United States Department of Health and Human Services (HHS) invested $49 million to build A.I. and blockchain solutions. These solutions will cut operational backlog and costs. States like Arizona, Illinois, and Delaware also have different measures to incorporate blockchain technology into their activities.

Government adoption can be a lifeline for blockchain technology. However, like every other aspect of commerce, private enterprise will be the key to a global blockchain presence. The rise of giant corporations like Amazon, Apple, and Samsung shows the potential of such an enterprise.

With the appropriate regulatory environment in place, such corporations can make a difference through blockchain. Blockchain’s greatest asset is its transparency, and this trait can come in handy for companies with supply-chain management needs.

The reduction of personnel costs is something any company seeking to increase profitability will always look at. Blockchain technology is an opportunity to cut these costs while improving efficiency.

The Future of Blockchain

For any innovation, the challenge is always whether it can live up to the hype. The dot com bubble is everlasting proof that many tech wonder stories don’t live up to their marketing. This phenomenon is the one issue blockchain has had to answer throughout its growth, and will continue to address in the future.

So far, so good. After all, blockchain has got to where it is despite the lack of mainstream marketing other innovations have enjoyed. The fact that it grew while seeming like it was joined at the hip to Bitcoin meant that it had to have a long acceptance curve. Bitcoin is a decentralized digital currency – an idea which many had a tough time understanding.

As 2020 approaches, blockchain is taking an increasingly prominent position in global commerce. It is one of the most exciting fields for all stakeholders.

Blockchain represents a new way of doing business, management, and even tracking value, and startups are at the forefront of this new era. Therefore, it is not overly generous to state that blockchain technology has a bright future. With more industry leaders giving it the green light, it is now time to seriously look for opportunities in this sector. In the future, it will be fascinating to see the heights to which this industry scales.

The Pros and Cons of Physical and Digital Gold