European Investors are Renewing Their Interest in Gold 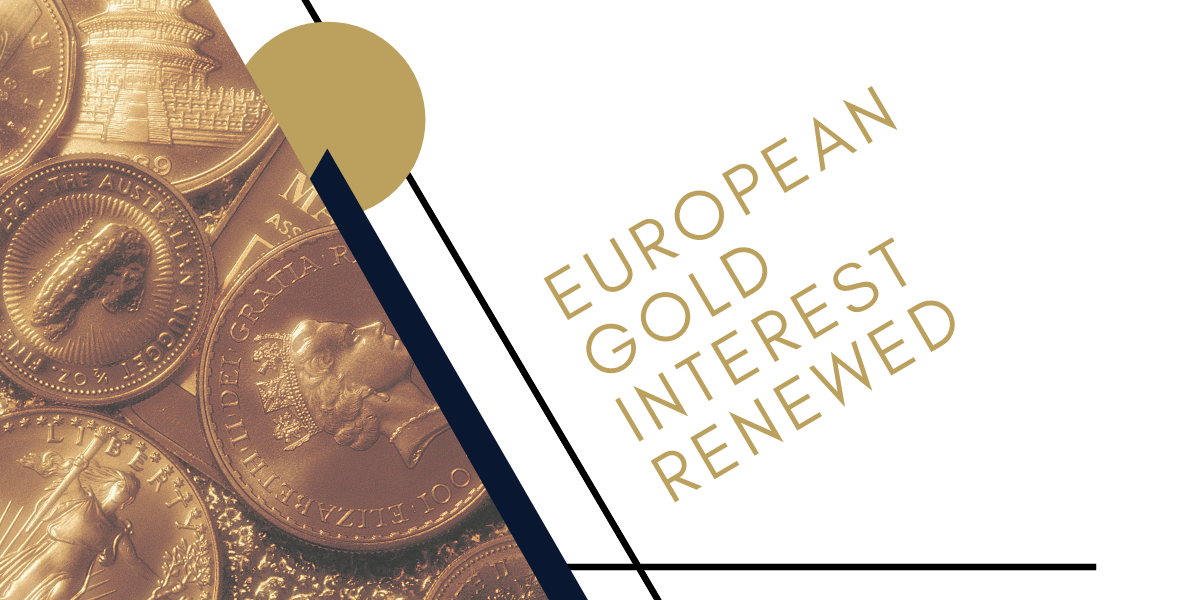 European investors are showing a heightened level of interest in gold. This trend reflects a turnaround in the status of gold as an asset in the world’s economy.

Before the 2008 financial crash, European central banks were net sellers of gold. Gold represented a bygone era: a barbaric relic without periodic yield that was fast falling out of favor with institutional investors.

Europe was undoubtedly the most advanced region in the world between the 11th and 20th centuries. Much of the continent had royal families that donned plenty of gold as a sign of status and wealth. As the continent modernized through the 20th century, the shift to paper money and more equal societies swept this order aside.  Gold had the vestiges of this era, and by the 1990s, it seemed to be relegated to a fringe asset.

Fast forward a decade, and gold is once again popular with the high and mighty, as well as individual investors.

A 2019 statement on the website of the Dutch central bank, De Nederlandsche Bank (DNB), best shows the perspective shift in the past two decades. The Netherlands has raised its gold holdings to over 600 tons despite being a pretty modern economy.

The statement in part read:

“Shares, bonds, and other securities are not without risk, and prices can go down. But a bar of gold retains its value, even in times of crisis. That is why central banks, including DNB, have traditionally held considerable amounts of gold. Gold is the perfect piggy bank – it’s the anchor of trust for the financial system. If the system collapses, the gold stock can serve as a basis to build it up again. Gold bolsters confidence in the stability of the central bank’s balance sheet and creates a sense of security.”

A Sense of Realism

Central banks have a track record of cautious, balanced communication meant to prevent overreaction from the public. Therefore, it is somewhat surprising to see some European central banks giving gold a direct endorsement.

Many would associate these institutions with a conservative approach that appraises paper money and the stability of the status quo.

Hungary is another country where monetary policy is shifting toward gold. The country’s central bank (MNB) conducted its first gold purchases since 1986 last year.

To explain this move, MNB described its rationale as follows:

“In normal circumstances, gold has a confidence-building feature, i.e., it may play a stabilizing role and act as a major line of defense under extreme market conditions or in times of structural changes in the international financial system or deep geopolitical crises. In addition, gold continues to be one of the safest assets, which can be related to individual properties such as the limited supply of physical precious metal. This asset does not have a link to credit or counterparty risk, given that gold is not a claim on a specific counterparty or country.”

Interestingly, the features that made gold an old-school, boring asset in the 90s have made it extremely appealing today. European institutional investors are now increasingly appreciating this reality. In hindsight, the decision by the Bank of England to sell off large amounts of gold in the late 90s looks foolish now. A lot of European central banks shared this dismissive sentiment.

Reasons for the Renewed Interest in Gold

As the new millennium started, the European Union couldn’t be stronger. The Euro was a darling for investors, economies like Greece were still decent, and the region generally faced fewer geopolitical crises.

The 2008 financial meltdown was a devastating reality check for the region. Many countries, especially in Southern Europe, have never truly recovered from this crisis. In 2019, the region’s economy was still barely growing. Europe’s largest economy, Germany, just about managed to beat a recession.

This region is not immune to geopolitical crises either. The migrant crisis in the aftermath of the Syrian civil war threatened to tear Europe apart, not only from a political standpoint but also economically.

Individualistic approaches to national economies are back in fashion. Therefore, European central banks are following recent trends from the likes of Russia, Turkey, and Kazakhstan in shoring up their gold reserves.

Moreover, Europe and most of the Western world is in a zero to negative interest era. With such circumstances prevailing, investors are looking to gold as a store of value.

Central banks have pushed low-interest policies for a decade now, flooding the global economy with cheap fiat money. Inevitably, investors’ trust in cash-backed investments dissipates with time because there is no timeline of departure for this policy.

Even ordinary investors seem to be catching on. Germany, for instance, is reportedly looking to lower the anonymous purchase limit for gold, from €10,000 to €2,000. Lowering the limit comes under the guise of anti money-laundering.

Such measures are a response to the increasing appetite for the precious metal, even among regular investors. Gold is an attractive asset to hedge against inflation. This quality is something useful in such uncertain times, hence the higher demand.

A Reflection of Global Trends

Despite the significance of this turnaround, Europe is relatively late to the party. Central banks across the world have been rapidly increasing their gold reserves, especially in the latter part of the previous decade.

In the past couple of years, central banks have bought gold at rates unseen since the end of the US gold standard in 1971. Countries like Russia lead the onslaught, with demand likely to remain solid for the foreseeable future.

Gold provides an opportunity for countries with stuttering currencies like Russia to hedge against inflation. The yellow metal has a standard price in international markets and presents an opportunity to shore up against further currency slides. Gold’s standing as a safe-haven asset among central banks has never been higher in recent times. For investors, it is a viable asset for portfolio diversification.

As a regional bloc, European central banks already have the highest amount of gold reserves worldwide, although the USA leads among individual countries by some distance. This positioning puts into perspective the importance of Europe to global gold trading. With the region looking to become one with a robust demand for gold, this could boost prices tremendously.

Investor interest in gold-related products like ETFs is equally strong. Inflows into gold-backed ETFs since the end of 2015 have been on the rise. ETFs are the primary tool for stock market gold exposure, and their popularity is a reflection of investor sentiment.

Even in this asset class, European investors are increasingly active with assets under management in European gold ETFs rising to 1,134 tons by the end of 2018.

The Role of Private Investors

In a zero or negative interest rate regime, and fears of a European recession and weaker European stocks relative to the American market, individual investors are showing high interest in gold. In Switzerland, gold ranks second only to real estate in terms of which asset ordinary people consider purchasing. Gold offers security and stability, which don’t seem so sure in a stuttering Europe.

The behavior of private gold investors points at individuals looking for such stability. Short-term speculation with the bull gold market is not a huge factor, although it may provide an incentive for some. Prominent investors like Ray Dalio suggest that gold may maintain its bull run for the rest of the year.

In summary, Europe is fast catching on to the new gold rush. With a struggling economy and geopolitical crises, gold popularity in this market is a logical result. The yellow metal has proven its mettle many times over during financial turmoil. Gold is making a strong comeback in this region not only among central banks but also private investors.