Expect Gold Prices to Remain High; US Interest Rates Will be Low in 2020 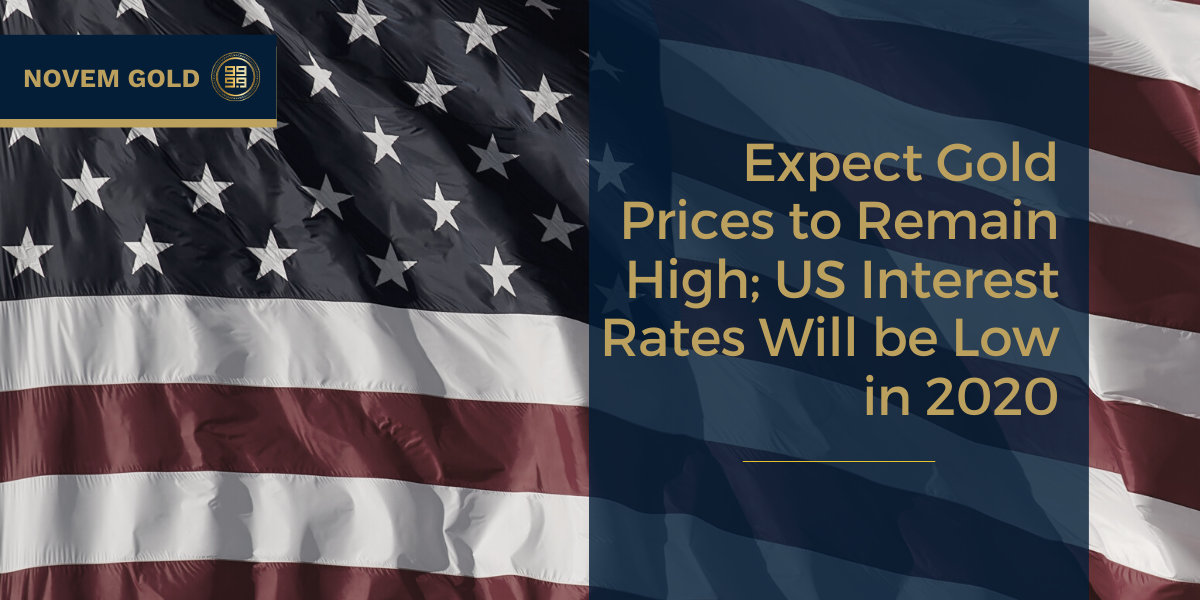 Gold will continue rallying into 2020 as there is little possibility of the Federal Reserve raising interest rates. Citigroup’s New-York based director Aakash Doshi sees little incentive for the FED to reverse its recent trend of slashing rates. In a phone interview with Bloomberg, he outlined his rationale:

“The bar for the FED to hike next year is extremely high. With the risks to global growth still to the downside, with inflation still undershooting, not overshooting, and with trade tensions still likely to persist through 2020, we think the bar to cut or to go back to policy easing is lower.”

The FED Decides Not to Change Interest Rates

Bullion is closing out its highest annual gain since 2010. A combination of looser monetary policy, the effect of geopolitical tensions, and generally high demand has had a cumulative boosting impact for gold.

At the final policy meeting of 2019, the FED opted to maintain the interest rates after three consecutive cuts. Moreover, Chairman Jerome Powell stated that it would take “a significant move-up in inflation” before he would support rate hikes. This position suggests that rate hikes are quite distant and will most likely hold low through next year.

A gold price rally past the watershed $2,000 mark in the near future is now a distinct possibility. With such low-interest rates, the FED is capping the rise in real medium-term yields, as well as nominal yields.

The effect of this low-interest regime can be overshooting on inflation, hence dollar negative. Gold prices can gain in the medium-term from this; at the very least, it prevents a significant sell-off.

The era of low interest rates should have lasted for a short time after the 2008 financial crisis. In the aftermath of the meltdown, major economies went on an easing policy. Central banks printed massive amounts of money and slashed interest rates.

The effort ensured that these economies got back to life as cheap money boosted borrowing and circulation. During this period, gold prices soared highly as confidence in fiat went down. Such a scenario is playing out all over again. The difference this time is that the world is not in a full-blown financial crisis.

This fact means that other factors are at play in making gold prices remain high. One of them is the geopolitical tensions between the USA and China.

The Impact of a US-China Trade Deal

A surprise trade deal between the US and China is arguably the most significant risk to gold prices in the short-term. Such a trade deal would come with the rolling back of tariffs and easing of international trade.

On Monday, gold prices steadied and the US dollar weakened, as this story continues to develop. The stock markets were awaiting more clarity on the “phase one” trade deal between the United States and China.

Spot gold prices of about $1,475.50 per ounce remained steady on Monday before surging past $1,500 on Tuesday.

Investors waiting on a US-China trade deal have been on a thankless rollercoaster. The two governments are incredibly coy about their intentions even though progress towards a trade deal seems to be in motion.

Phase one of the trade deal involved rolling back some tariffs set to take effect later this week. The dollar fell slightly on this uncertainty, making gold cheaper, as well as other currencies. This dynamic prevented a gold sell-off in the market. AxiTrader market strategist Stephen Innes, in a note, said:

“The phase one deal fell short of market expectations and is probably not enough to fully restore business confidence or generate a meaningful recovery in exports or investment,”.

Investors have taken their focus to phase two of the trade deal. Meanwhile, gold can continue to benefit from trade uncertainty and tensions. Gold is up nearly 15% for the year following a months-long tariff war between the world’s two largest economies. This trade war has had a corresponding negative effect on the world’s economy. Accordingly, investors see gold as a more attractive safe-haven investment.

Cause for a Bullish Gold Industry

Even in the event of a US-China trade deal, gold can retain its strong run into next year. Global growth is still not a lock, even as the US economy continues to outperform expectations. Developing economies are not particularly certain of growth, and these regions continue to push demand for gold.

2020 will still see significant uncertainty and turmoil in the global economy. Many of the geopolitical tensions remain unsolved, and growth is still slow in certain parts. Therefore, the issues of trade wars, Brexit, and recession fears will still be a lingering threat.

Low and negative bond yields are a constant feature in many developed countries. Bonds are traditionally great for portfolio diversification. With low risk and a periodic yield, balancing bonds and stocks in your portfolio was always a no-brainer. However, in low-interest-rate regimes, the bond yield is much lower.

More investors are looking at gold instead as a tool for portfolio diversification. In such a scenario, the opportunity cost for holding gold is considerably low. Besides, you get the opportunity of being part of a gold price rally.

A robust raw commodity market in the US can also mean more demand for precious metals. Either way, gold is in a great position as an asset heading into 2020.

In the event that US-China trade tensions linger on, or that the second phase of the trade deal is equally underwhelming, gold is poised to soar. The overall health of the global economy is not entirely convincing. A crippling of its two biggest stars would have a devastating ripple effect.

Demand for gold is one of the quiet factors in the historic bullion rally. Central banks like those of Russia, Kazakhstan, and China are adding to their gold reserves tremendously. Part of this is an effort to de-dollarize world commerce. On the other hand, it could be a tacit acknowledgment of the power of gold as a stable asset.

There is no indication that the demand will slow down. A country like Russia, for example, has a stuttering currency, with the weight of US sanctions over the annexation of Crimea still taking a toll. Gold is an opportunity to have a stable, valuable commodity to hedge. The advantage of gold is that no single entity controls it, and that value is entirely dependent on market forces.

Therefore, many traders are looking to add gold to their portfolio across the world. With prominent investors like Ray Dalio giving gold a useful nod, many private portfolio managers are looking to gold increasingly as a way to store value. After all, gold has been one of the best-performing assets of 2019.

Trading gold is now simpler than ever. Investors who don’t want to deal with the logistical difficulties of handling gold physically can invest in gold-backed ETFs for equal measure. For those keen on having redeemable gold, trading gold-backed tokens is an attractive proposition.

Given the position of the Federal Reserve, it is unlikely that the US central bank will raise rates next year. This era of low-interest rates has been excellent for gold as an asset. President Trump is hell-bent on pushing the economic growth in the US as far as possible. This fact means that his administration will exert pressure on the FED to keep rates as low as possible and even cut them again. Such a scenario injects more cheap money into the economy, boosting the status of stable assets like gold.

Much like any other asset in the market, it isn’t easy to definitively forecast gold prices. However, the events that influence its price seem to be pointing generally in one direction. The gold Bull Run is likely to extend and last through next year.