Ireland Readies a Bill That Will Regulate Cash for Gold Transactions 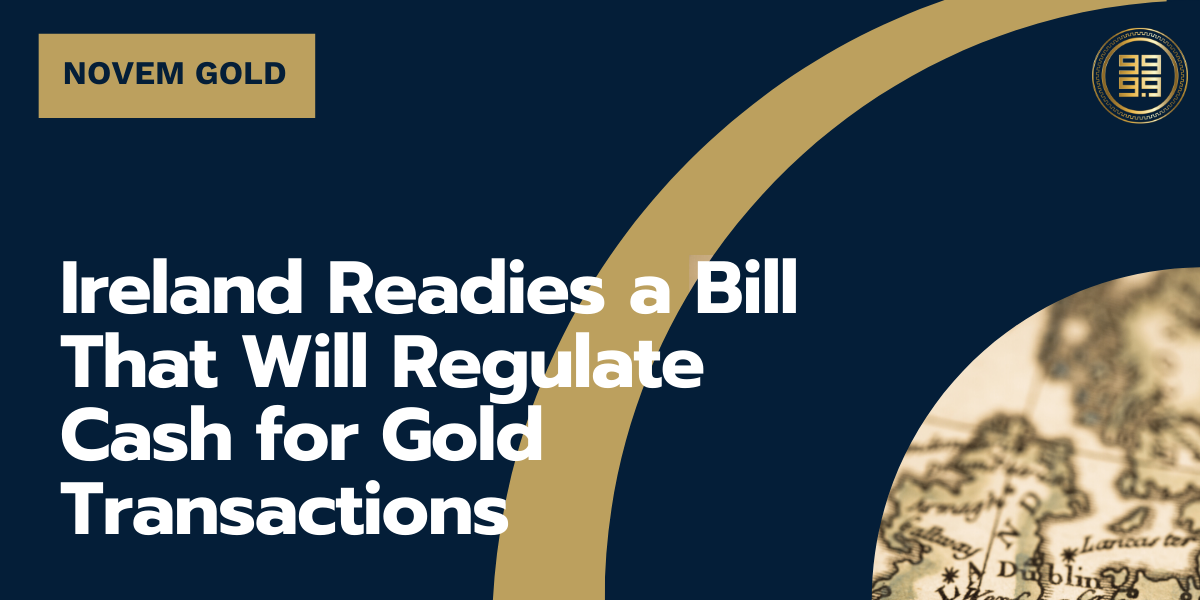 The Government of Ireland is drafting a bill that aims at regulating the cash-for-gold trade in the country.

Ireland’s Justice Minister Charlie Flanagan confirmed this development during a recent round of parliamentary questioning from Social Democrat TD Catherine Murphy. His department intends to create a licensing system for the industry.

This bill will affect dealers in “cash for gold” or other precious metals. Dealers will have to undergo identity verification when selling these items secondhand. The legislation also intends to give more power to enforcement agencies, including the Gardaí. Justice Minister Charlie Flanagan confirmed this, saying:

“I can confirm to the Deputy that my department is currently drafting a bill in relation to the purchase of precious metals by registered outlets from the public.”

Cause for the Regulation

Public concern about cash-for-gold shops facilitating jewelry burglars is the primary reason for this move. In a 2012 report, Ireland saw an increase in burglaries, coinciding with a dramatic rise in gold prices. The common thread between these trends is the proliferation of cash-for-gold shops across the country.

Cash-for-gold shops operate outside the purview of regulations that apply to regular pawnbrokers. Accordingly, law enforcement officials in the Republic of Ireland have had a hard time policing this industry.

The Irish government began consultation on regulating this industry in 2015. Common proposals aim at introducing proposals to have better safeguards that prevent the sale of stolen jewelry to businesses dealing in precious metals.

ING Financial Group, a leader in DLT adoption, is working on a digital asset custody solution. Even though initial details are sparse, the reference to native security tokens indicates how the platform will look.

The popularity of blockchain continues to grow as the technology distinguishes itself further. Initially, many thought that the fate of the blockchain and early cryptocurrencies was inextricably linked. Now, with the development of stablecoins and other diverse uses, blockchain continues to disrupt various industries. Gold trading is one such field that is ripe for blockchain efficiency disruption.

The Justice Ministry committed to introducing regulations back in 2016 in the government program. Last year, Charlie Flanagan stated that he was considering another round of public consultation before arriving at the final proposals. The department is taking views from various stakeholders to come up with the most appropriate regulations. This joint effort explains the timeframe it has taken to arrive at final proposals.

Minister Flanagan further stated that his department does not have an accurate number of current gold shops in Ireland. However, it could be higher than the 124 that were operational in 2012.

The Role of Politics in the Gold Industry

Ireland is an example of how a government can take aggressive steps to rein in nefarious actors in the market. Even without regulation, government policy over the economy affects gold prices. The term ‘safe-haven investment’ for gold is used because the asset generally does well during market downturns.

Therefore, real-world events, especially in major economies, are very consequential to the gold market. The US-China trade war is the most recent example of geo-political turmoil rocking economies, and having a corresponding positive effect for gold prices. The FED policy of low-interest rates is yet another example of a policy effect on gold.

Closer to Ireland, Brexit uncertainty still has the market on high-alert. The Conservative Party of Boris Johnson won a commanding victory in the latest election, and all focus now is on whether the UK can successfully exit the EU.

Gold, therefore, has a significant role to play in the current financial sector. Governments can choose to regulate the industry or have it be a ‘Wild West’ scenario. Still, gold has the consistency and reputation for thriving even in the absence of such regulatory measures. The protections are, as a matter of fact, mostly to the benefit of consumers. Getting a verification system to record the identity of second-hand gold sellers is one means to this end.

By its status as a valuable store of value (SOV), gold has its fair share of unscrupulous dealers.  This phenomenon covers both merchants of fake gold and those who sell illegally-sourced gold.

On August 28, 2019, Reuters reported the extent of the forgery crisis roiling in the gold industry. In the past three years, gold bars with fraudulently acquired Swiss refinery stamps worth at least $50 million, circulated in the international gold market. These bars even found their way into a reputable gold mover like JP Morgan Chase.

Therefore, once gold has made its way into the gold market, it isn’t always easy to know whether it was illegally sourced or not. This reality makes points of entry very important. Accordingly, the efforts by the Irish Justice Department are in line with this logic.

Gold currently has a historic bull run. With prices higher, people globally are looking to get into the market to cash in on the good times. Unfortunately, this cycle presents added incentive to fraudulent entities to get into gold. Jewelry burglars are also looking for their next score.

With the current regulatory regime, there is little to no monitoring of the cash-for-gold shops. Therefore, burglars know that once they have a successful heist, disposing of it is pretty much straightforward. This ease could change with the draft bill proposals.

2019 has been an excellent year for gold. The year to date appreciation of over 14% made gold one of the best-performing assets in the market. According to World Gold Council figures, central banks around the world are pushing demand as currencies, particularly in developing countries, continue to stutter.

The status of gold as a safe-haven investment is, therefore, as solid as ever. Even smallholders now have extra incentive to keep their jewelry in case need arises to put some cash together.

The Need for Proper Verification Systems

It is evident that regulators need an efficient method to track gold from mining, and later as it moves in the market. Gold has universal value, and gold holders have an easy time disposing of their holdings when the need arises.

Without checks in place, jewelry burglars can exploit this ease too. This proliferation is why the Irish Justice Department is working on the proposals to bring this sector under control. With proper systems in place such fraudulent entities will, at the very least, have a harder time exchanging the gold they have for cash.

The verification of their identities will have to be part of the considerations. In mainstream banking, customers usually undergo KYC checks to prevent criminal activities like money laundering. To protect the integrity of the gold market, a version of such checks has to be in place. This way, regulators can know who sold what amount of gold, where they sourced it, and more relevant information.

A secure gold market is a great development for stakeholders in this industry. Already, digital gold trading is bridging this gap with the transparency of blockchain technology. The monitoring tasks boil down to verification and tracking, which the blockchain does seamlessly.

Generally, the status of gold as an investment is very secure. However, it is essential to cut out criminal elements for the industry to get even better. Global markets are not even in full recession mode, yet gold continues to endear itself to investors.

With prominent investors giving gold the nod for portfolio diversification, its importance is set to become even more apparent in the financial markets. Therefore, efforts such as those of the Irish Justice Department are welcome, provided they don’t so far as to stifle gold trading in the country.

Why is Turkey Currently Buying lots of Gold?