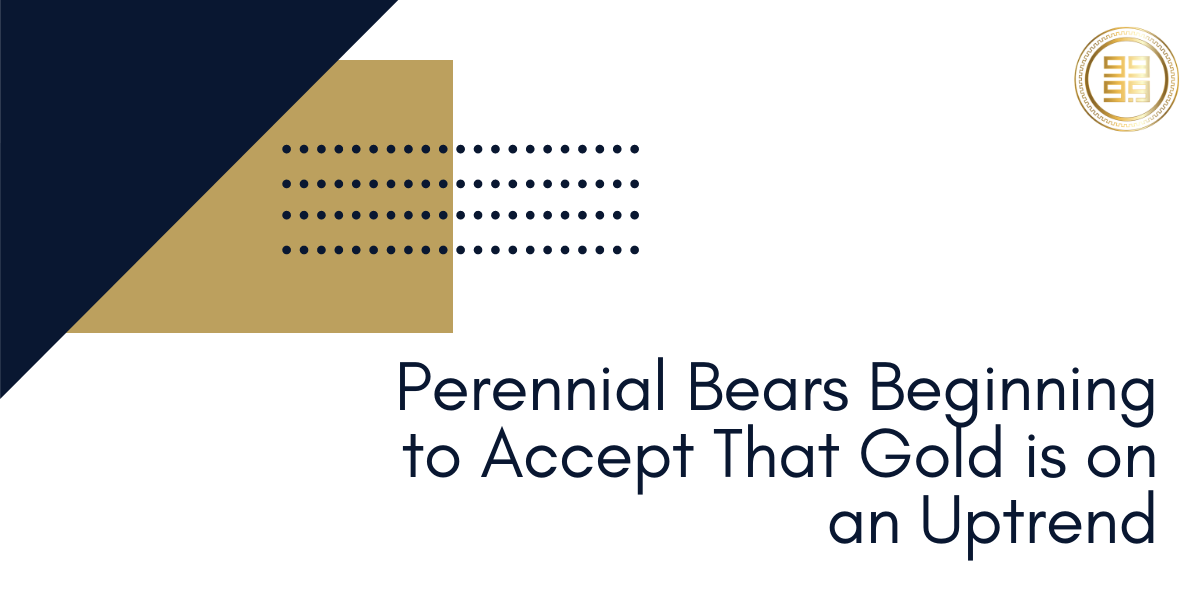 Analyst James Turk, the founder and chairperson of GoldMoney, like many other gold bulls, predicts that 2020 is going to be a fantastic year for gold. The analyst notes that investors, once skeptical of the precious metal market, are heavily investing in gold.

In an interview, he said:

“It is now over four years since gold made its low in December 2015. Prices have been trending upward since then. It’s not been a straight line, of course; it never is. But even perennial bears are now starting to accept that gold is in a bull market …”

Data from the Commodity Futures Trading Commission (CFTC) shows that large gold speculators have been taking higher stakes in the gold futures market.

Consequently, the number of non-commercial futures contracts has seen increasing weekly gains since December 2019. Turk is an authority on the precious metal market and offers forecast commentaries on its performance.

The gold market analyst notes that the chaos that has ignited in Iran has brought the haven potential of gold to the forefront. However, there could be stronger forces than geopolitics behind the current gold bull run.

Turk has co-authored The Money Bubble, alongside John Rubino, explaining the untenable nature of the global debt load. In the book, Turk posits that the fiat monetary system faces an eventual collapse.

The authors also outline some ways that central planners are escalating the debt situation by trying every possible means to ward off the collapse of the money bubble.

In early 2019, disheartened by the gold market’s lack of traction in the previous year, many gold bulls were wondering if the price per ounce would take a nosedive to the $1,100 range or worse.

There was a fear that perhaps for the first time in almost a decade, the prices could fall into triple-digit territory. The market fundamentals have, nonetheless, been showing a very different and optimistic outcome.

They show a potential greater height for the gold market than they did three decades ago. The 70s were great years for mining and gold stocks, generating mega bull runs that brought in astronomical returns.

In sharp contrast, the stock market was also floundering, which made gold an asset of choice. Come the 80s, gold’s price per ounce peaked at $800 and then went on a two-decade-long bear run.

During this period, they criticized gold bugs for holding onto what had been widely accepted as a ‘barbaric relic.’ Fortunately, the market began to awaken between 2001 and 2011, as the metal’s premium features shone in a debilitated global financial scene. In 2011, gold peaked at a high of $1,900 per ounce. Then the price began to dip once more.

The market collapsed and spent five years in the $1,200 to $1,300 range. It is during this period that Warren Buffett famously said that he would not buy gold because it has no utility value. Gold bulls, however, held steady as the bears took their fair swipes at the gold market.

Buffett, in a 2018 letter, asked investors to hold onto their stocks and avoid the panic that often led them to the gold market. He illustrated that if he had invested the $114.75 that he had bought his first shares with in gold instead, it would only have yielded 1% of what he gained from the stock market.

It would be easy to discard the potential of gold if the market fundamentals did not support its performance. Fortunately they do, and the bears have noticed it. Gold supplies, for instance, increased massively between 1980 and 1990.

In this decade, the global production of gold rose from 1,220 tons to at least 2,200 tons. There were elephant-sized gold deposit discoveries in Australia and Nevada. Additionally, there was the introduction of processes such as heap leaching that made the mining of uneconomical gold deposits economical.

Gold Supplies on a Decline

By the turn of the century, the precious metal’s annual supply had doubled by 112% compared to what it was two decades earlier. There has been a 22% increase in gold production globally over the last two decades.

Data by Statista shows that global gold production rose from an annual 2,470 metric tons in 2005 to 3,260 metric tons in 2018. Pundits, however, predict that there is a contraction of supply in gold, and the world could be at last running out of significant gold deposits.

CFRA research analyst Matthew Miller says, “The largest and most prolific reserves have already been found … Gold miners are struggling to grow reserves in line with their production.”

Gold mine discovery has been on the decline in the last 30 years, despite the massive amounts of exploration funds pumped into the exercise. There has also been a decline in the amount of gold extracted per ton of gold deposits.

As a result, the mine grade average has dipped from highs of 10 grams per ton in the 70s to lows of 1.4 grams per ton. To survive this change, gold producers are merging, and acquiring the existing productive mines as the value of mining companies continues to rise.

They have realized that it has become cheaper to buy physical gold than prospect and mine it. Analysts say that miners are awaiting higher gold prices per ounce to carry out the expensive process of discovering, financing, and building new mines since lower prices discourage low production mining.

There is a possibility that the current gold rally could push the price of gold high enough to encourage the growth of new production. While this could be bearish for the market, recycled gold production is also on the decline, ensuring that there is no market of surplus gold.

One other gold price equation that makes it impossible to dismiss gold is the increasing global money supply. As an illustration, the US’s M2 doubled in the decade between 1980 and 1990. It then flattened out in the early 90s, increasing by 45% by the year 2000.

Unfortunately, the M2 has ballooned by over 80% in the last decade. For this reason, though gold supplies were to increase in the next few years, the supply of money was already too high.

Central banks are in a spate of currency devaluations, resulting in trillions of silly Yen, USD, and Euros, that will continue to outpace gold mining supply. It is inevitable that a change in the FED’s stance in raising the value of the dollar will be a headwind that only slows down the ascent of gold. Eventually, the precious yellow metal will reach its true potential.

Gold is This Century’s Best-Performing Asset

Gold bears realize that the fundamentals for gold are much better than they were at the peak of the 70s gold era. Analysts have noted that gold is this century’s best-performing asset. There is also great room for improvement. Charlie Morris of MoneyWeek predicts a $7,000 an ounce gold price because of the yellow metal’s excellent track record.

According to Morris, gold will keep rising due to the FED’s easy money policy. Gold has also beaten the performance of global equities, which have slumped because of the weak economic outlook in Japan and European countries.

Despite the precious metal’s 2011 to 2016 bear market, the asset has kept the lead even in emerging markets in the absence of a supporting yield. US equities, therefore, need not fall for gold to maintain its rally. The stock market is driven by strong economies, but also by easy money, stimulus, and financial engineering. Now that tightening has become less of a threat to the gold market, there is every reason for gold to rally alongside equities.

One other fundamental factor that is turning the precious metal into the asset of choice is the falling real yield to a 0.1% level in the US. While this amount is not as low as Europe’s negative yield rates, it still gives gold a tailwind.

Real rates will keep declining as inflation rises because the inevitable burst of the balloon has to be kept in check for as long as possible. Energy costs dictate the price of commodities, and any future oil shock could easily cause an imbalance of prices.