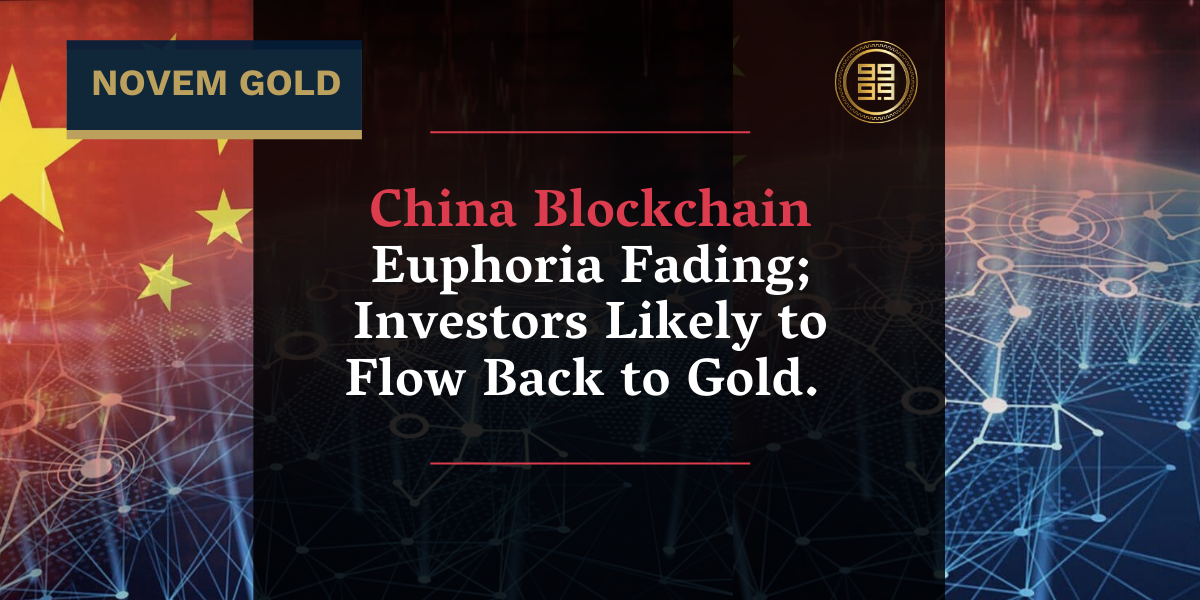 According to a recent Twitter survey, Bitcoin investors are likely to turn to gold as the cryptocurrency’s most recent hype fizzles out, leaving losses in its wake. The poll, conducted by Novem Gold, reveals the extent of the disillusionment among BTC enthusiasts as prices remain largely suppressed in H2 2019.

This slump, however, is most alarming because it closely follows the sharp gains the coin had enjoyed after optimistic comments from the Chinese head of state regarding blockchain in October. The speech, widely regarded as a watershed moment for the cryptocurrency, could prove pivotal for Bitcoin and the crypto world. China’s massive population can single-handedly send the coin’s Bull Run back on track.

In his speech, Chinese President Xi Jinping referred to blockchain as “an important breakthrough.” Before the statement, the prevailing sentiment was that the Chinese government was anti-blockchain. The primary signal came after its September 2017 banning of initial coin offerings (ICOs). The speech was therefore interpreted as a green light indicating that China was willing to embrace cryptocurrency trading in all its aspects, which would push Bitcoin prices once more to the moon.

China, for many years, has been the epicenter of blockchain and cryptocurrency activity. Before a large number of investors in other parts of the world grew accustomed to Bitcoin, China had already established itself as a mining hub. The East Asian nation has significantly contributed in many ways to the rise of the digital currency sector over the years.

As an illustration, as of 2017 the country’s insatiable need for crypto assets was almost 90% of crypto’s total global trading volumes. Shockingly, just a few months into 2018, this demand dipped below the 1% mark. This decline in demand also followed Bitcoin’s most significant price dip, which saw it go from a high of $19,800 to a low of $6,200 each in less than two months.

The excitement over the Xi Jinping speech was therefore palpable in October when he said that his country would “seize the opportunity” that blockchain offers in research, standardization, and development. The Chinese President is the first leader of a global economic giant to make such friendly remarks towards a technology that is maligned by some of his peers.

If the government embraces cryptocurrencies, Chinese Bitcoin bulls would return and push prices through the roof. Following the unexpected speech, the price of Bitcoin temporarily surged, adding 40% after rallying to a high of $9,526 on November 4th.

Unfortunately, the rise halted and a consistent correction happened, lowering the value of the token to a $6,524 mark on November 25th, a much lower price than before the Xi effect. Bitcoin has, however, recouped some of its losses over the last few days, but it is still trading at half the price in comparison to June 2019.

The Chinese, in contrast to many other countries, have many advantages when it comes to cryptocurrency awareness. They have, for instance, long been aware of the virtues of speculation into new asset types. They are also more aware of virtual currencies and have, over time, developed cautionary optimism for digital currency regulation.

Tencent QQ’s reward program, for example, paid out in Q coins and had more than 221.4 million active users by 2006. Consequently, some of the earliest BTC adopters were Chinese. Bitcoin’s popularity in China also increased with the East Asian country’s rise to the position of the second most powerful economy on earth.

China’s 12th strategic economic plan, released in 2011, was one of many development aspects aimed at the reduction of the poverty rampant in the nation’s rural zones. As a result of the economic success of this plan, China’s emerging middle class burst onto the scene, increasing the country’s domestic consumption from a low of 4% in 2000 to a high of 68% in 2012.

The money that was left over after savings were taken care of was channeled into speculative investing. Since this aspect of making money is a big part of the investment culture of the Chinese, the country’s investors took a quick liking to Bitcoin.

The Chinese, however, were not purchasing the digital asset for its privacy attributes but rather for its investment appeal. Unlike many Bitcoin enthusiasts in the West who love the digital currency for its P2P features, the Chinese adopted BT for its Gold 2.0 features. Speculating in gold is an investment activity most Chinese are accustomed to.

This difference is the reason why, when the Silk Road closed down, the Chinese market for crypto was hardly affected. In the West, however, the closure of the online black-market platform adversely affected Bitcoin prices.

The interest in BTC investment in China rose even further with the loosening of the government’s tight grip on financial markets. At the time, Beijing was in the process of developing diverse financial markets for the new elite to invest in, such as derivatives. A strengthening economy with friendly regulations was just what the Bitcoin investment frenzy required.

With the creation of BTC mining hardware in 2013, the participation of the Chinese as miners and investors soared. New 2016 to 2017 crypto regulations, however, brought the Chinese crypto trading market to its knees because they quashed the ability to speculate in Gold 2.0.

Despite the death of crypto speculative trading, the Chinese crypto community is still very vibrant despite the stringent regulations around it. This resilience is especially visible in the area of blockchain application.

Such innovation is what the Xi Jinping government is promising to support, not decentralized cryptocurrencies that make it difficult for governments to control money as they wish. Since the pro-blockchain October speech, there has been a cascade of activity in the Chinese blockchain scene.

The Chinese central bank is, for instance, readying itself to release its Digital Currency Electronic Payment System. The People’s Bank of China intends to replace the use of fiat with the DCEP blockchain-based payments solution. This move would make the country the first major world economy to embrace a native digital currency.

With the launch of the digital payment systems, China would find it much easier to extend the influence of its monetary policy to the rest of the world. While Beijing has no regard for “censorship-resistant” and permission-less digital currencies – as they endanger capital controls – it is building its centralized digital currency to supplant Bitcoin.

This effort is a true testament to Bitcoin’s significance and the Chinese government’s appreciation that the world’s monetary system is dependent on technological advancements. Unlike the West, China has harnessed the power of internet connectivity without losing its control over freedom of expression. The economic giant is now strategizing ways that it can harness the power of blockchain, albeit minus its decentralized aspects.

It could be that the Chinese government’s interest in the blockchain is part of the drive to end the age of the USD. This is an opportunity to move the country past its dependence on US-owned foundational technologies. According to Xi China, through blockchain, will “take the leading position … occupy the commanding heights of innovation, and gain new industrial advantages.”

China, however, is determined to make its cryptocurrency more acceptable to the international and domestic markets than Bitcoin has ever been. The second-largest economy has been amassing massive amounts of gold, which analysts say will back its native digital currency.

A gold-backed digital currency is acceptable in any part of the world and will significantly enhance Beijing’s de-dollarization policy. It is therefore expected that the county will maintain its leading gold mining and buying positions in 2020, which should add more fuel to the ongoing global gold rally.

China Suspends Short Selling to Inject $173.8 Billion for Liquidity: What it Means for Gold

Amid a Shift in Monetary Policy, Slowdown in the Global Economy and China-Trump Brawl, Gold is The Perfect Shield