The Next Recession May be Brutal: That’s a Net Positive for Gold and Bitcoin 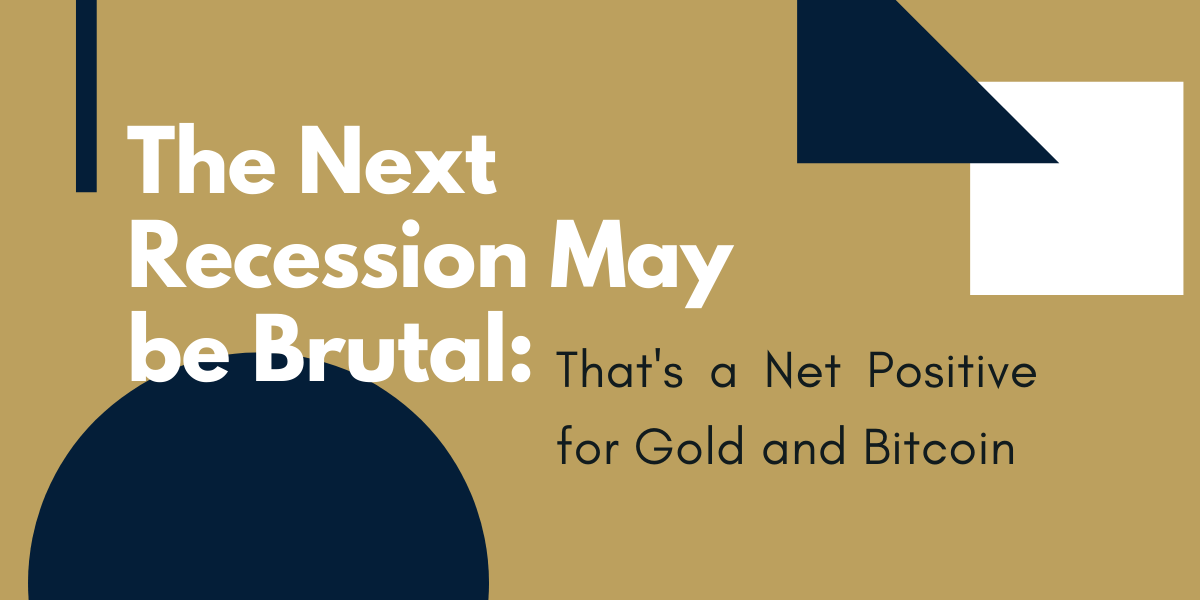 Prominent gold bull Peter Schiff predicts that the next recession will be brutal, and owning gold or Bitcoin will be a net positive.

The US economy is more robust than it has ever been. With a roaring stock market and decent consumer spending, talk of recession is minimal. However, certain aspects of this growth are cause for investors like Schiff to raise the alarm:

“Today’s revisions to Q3 GDP confirm the U.S. economy is a bubble. GDP ‘growth’ is driven completely by excess consumer and government spending, as the real economy contracts. But such spending is a function of debt, much of which can’t be repaid. The coming bust will be brutal!”

With the S&P 500 pushing record high after record high, stock market traders are as bullish as ever. Such sentiment could make the next crash particularly devastating. In the 2008 financial crash, stocks in a hallmark Wall Street firm, Bear Stearns, went from over $100 to $2 within a week. Investing in stocks can be great, but when it rains, it pours.

Accurately predicting the next recession is often a hit-and-miss game even for the top analysts. Even those who predicted the financial crisis of 2008 couldn’t pinpoint with precision when it would begin. Regardless, this does not discredit anyone who tells investors to be cautious. The issues Schiff raises are pertinent to the macro-economic stability of the American and global economies.

Even those who make the right predictions about an upcoming recession have no respite if they do nothing about it. Building a defensive portfolio is one way to absorb such shocks. In recent decades, gold has distinguished itself as the premier safe-haven asset.

Gold Prices During a Recession

Gold has historically performed well during times of financial uncertainty. Naturally, recessions are the extreme end of such turmoil, meaning that gold prices should peak. In the aftermath of the 2008 financial crisis, gold prices rose dramatically and peaked in 2011 at the height of quantitative easing measures from major central banks.

If a brutal crisis such as Schiff predicts could happen comes to pass, gold prices should ease past the $2,000 mark. Gold has millennia of reputation and scarcity that makes it the perfect safe-haven asset in such a crisis. Therefore, investors see it as a valuable asset to hedge against recessions. If you are already in one, it can provide cover against further negative slides. This stability is why investors like Schiff advise that traders have anywhere between 10-30% weighting in gold. Whether split between physical gold and mining equities, gold-backed ETFs, or any other arrangement, gold has a track record of weathering the storm.

Bitcoin as a Store of Value Asset

Using the phrase ‘store of value’ for Bitcoin may sound like an oxymoron. After all, Bitcoin and cryptocurrencies are notorious for volatility in their few years of existence. In the 2018 calendar year, Bitcoin went from about $18,000 down to about $3,400 only to rebound to over $10,000 by mid-2019.

However, one trait gives Bitcoin a silver lining: decentralization. Bitcoin is a decentralized, pseudonymous network that is independent of central bank control. Accordingly, Bitcoin has the eye of many investors who seek to diversify their holdings.

So far, there is little evidence as to whether Bitcoin will trade like a safe-haven asset during a full-blown crisis. The fact that Bitcoin does not have a direct correlation to the mainstream is what drives interest. Bitcoin prices are purely market-driven as no one controls supply like regular fiat.

Therefore, some speculate that in the event of a financial crisis, investors will flock to Bitcoin just like gold. Recent history suggests that temporary Bitcoin investors hold the coin for speculative purposes rather than a store of value. Will this change soon?

It could be that investors allocate money to risky assets when they feel comfortable about investing generally. Therefore, there is a distinct possibility that investors could shy away from Bitcoin during times of economic turbulence.

What will transpire during an actual recession is difficult to predict. Bitcoin may have insulation from mainstream stocks, but bearish sentiment can affect investor sentiment either way. You can have a situation where investors hedge Bitcoin more or avoid high-risk assets in general. It will take time before Bitcoin has the stability and reputation of gold.

The maturity of crypto markets between now and when an actual recession hits is also a factor. Bitcoin can be a viable alternative to gold, but a lot of stars have to align.

Based on current economic and policy trends, gold is in the perfect position to have a net positive from a recession. Incredibly, even with the S&P 500 and other stock market indices up by a lot, gold has had a strong bull run in 2019.

The macro-economic factors that have fueled gold prices include geopolitical tensions and low interest rates. All through 2020, these factors will still loom large.

Gold enjoys a stability that Bitcoin holders can only dream of. Even in the rare event that an institution or person dumps a significant amount of gold in the market, the net price effect will not be as drastic as with other assets.

Demand for gold is only getting stronger with the resilience it is showing. Central banks in emerging and struggling economies are adding rapidly to their gold holdings to hedge against currency slides. Accordingly, the likes of Russia, China, Kazakhstan, and Turkey have added significantly to their gold reserves in recent years.

Part of this demand stems from an effort to reduce reliance on the U.S. dollar as a reserve currency. Russia and China are dealing with sanctions and a trade war, respectively, while many developing countries have stuttering currencies. Gold provides a useful alternative to store value for such countries.

Additionally, Islamic countries like Iran, Malaysia, Turkey, and Qatar are considering a gold barter system among themselves to hedge against future economic sanctions. Iran continues to bear the brunt of punitive sanctions while Qatar almost experienced an economic shutdown after a Saudi orchestrated blockade in 2018. The deliberations began after an economic summit led by Malaysian PM Mahathir Mohamed from the 18th to the 21st of December 2019.

Therefore, gold enjoys a universal credibility that Bitcoin and crypto can only dream about. When looking to store value or hedge against a stock crash, gold is still the premier asset to hold.

Gold to Surge in the Coming Decade

Investors see the value of using bullion as a hedge. Even though gold cannot replace government bonds entirely in portfolio diversification, the case for reallocating a portion of normal bond exposure to gold is as strong as ever.

Bullion has had a steady decade of growth through the 2010s. It has performed better than most assets, save for outliers like cryptocurrencies. Stocks have rallied in the past decade, but a combination of high debt levels and low interest rates places the value of fiat at a precarious place. These factors have allowed gold to maintain solid prices even through periods of relative economic prosperity.

For those who distrust fiat and central bank management of fiat, hedging gold is a no-brainer. Having at least 10% gold in your portfolio is a decent approach to start the next decade. Investing in bullion, gold mining equity, or gold-backed ETFs provides useful diversification to your portfolio. With digital gold-backed tokens now available in the market, you don’t need to worry about the hassle of storing and transporting the gold. Either way, investing in gold now puts you in a great position entering the new decade.

Can Blockchain Help the unbanked? How?