Venezuela and Turkey said to have a Secret Gold Deal 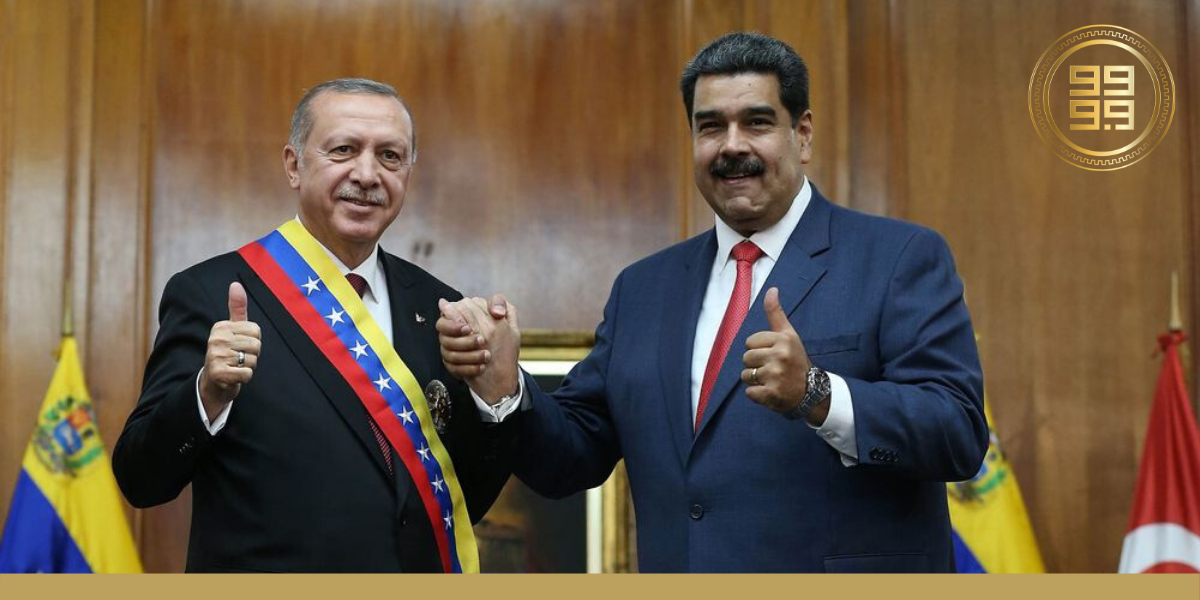 Venezuela is a nation whose economy is 90 percent dependent on oil exports. Its president’s tiff with the US that has escalated into full-blown sanctions on these exports could, therefore, not have hit Venezuelans harder. The Latin America country has more abundant proven oil reserves than the well-known crude oil powerhouse, Saudi Arabia. Venezuela’s crude oil production has, however, been on the decline in the last few years, despite its owning the largest oil reserves on the planet. However, rumor has it there is Venezuela and Turkey gold deal, between the Turkish President Recep Tayyip Erdogan and Venezuelan President Nicolás Maduro.

Money meant to develop, prospect, and pump more oil from the ground has all but run dry. The sanctions have, therefore, not only sped up the economic collapse of a once budding 3 million barrels of crude per day industry, but have left ordinary citizens destitute.

The January 28 sanctions on the Venezuelan national oil company, PDVSA, were meant to push President Nicolás Maduro out of power. Venezuela exports most of its crude oil to the US. In fact, Venezuela is the fourth-largest crude oil importer to the US, after Canada, Mexico, and Saudi Arabia. The Latin nation has, consequently, not only been left with too much crude oil on its hands but has been deprived of crucial naphtha.

Naphtha imported from the US is blended with the very heavy crude Venezuela produces, before its transportation. So the nation is therefore not only bereft of its vast US Gulf Coast refinery market but lacks the hydrocarbon it needs to dilute its oil and sell it to other smaller but willing buyers like India and Russia.

This catch-22 situation has left the otherwise wealthy and modern Latin nation’s population in a humanitarian crisis. Basic supplies have run out.  As expected, Maduro has done all he can do to help his people, weather down this war of attrition. His government has not only tried to use its oil to fix its economic woes but has also introduced a cryptocurrency that would remain unaffected by USD-based sanctions.

These measures have, however, not withstood the ire of the world’s largest economy and have therefore failed to curb the skyrocketing inflation. The deployment of the US “nuclear option,” the sanctions on oil, should have left Maduro with no other choice than to exit power or deal with a crisis.

Maduro is, however, still in power, heavily supported by the Venezuelan military leadership. The country has also received international support from Russia, Syria, China, and Turkey. Their administration has decried the US’s propensity of interfering with other nations’ sovereignty. Russia has assisted Venezuela to buy alternative naphtha. Perhaps the country that has done most to prolong Maduro’s occupancy of Venezuela’s highest seat of power is Turkey.

The Turkish President Recep Tayyip Erdogan has not only publicly vowed to stand with Maduro but has given Venezuela an alternative economic lifeline. Since 2016, Maduro has made official visits to Turkey, the first-ever made by a Venezuelan head of state to the Eastern European country.

A Venezuelan-Turkish Joint Committee has been formed under both nation’s foreign ministers and several trade agreements signed. Turkey has boosted its bilateral trade to Venezuela and has considered using a barter system of trade for payments for food, medicine, and oil. In fact, as most of the world’s international airline carriers turn their backs on Venezuela, Turkish Airlines launched flights to Havana and Caracas in 2017.

Venezuela and Turkey gold deal has strengthened this commonwealth. Maduro has also moved his country’s gold refineries to Turkey from Switzerland, to avoid seizure of more Venezuelan assets by US sanctions. Consequently, in 2018, Venezuela is said to have exported $900 million worth of gold or 23.62 tons to Turkey. There is, however, a lack of transparency on these transactions, which makes us consider Venezuela and Turkey gold deal as a secret one.

Venezuelan officials have claimed that the gold sent to Turkey for refining will head back to its central bank.  There have, nonetheless, been conflicting reports that Venezuela has been selling off its gold reserves to Turkey. There also has been a spike in the gold trade ratios between the United Arab Emirates and Turkey. The running hypothesis is that Turkey is selling Venezuelan gold to the UAE, giving Maduro’s government the required liquidity it needs to sustain its social welfare programs.

Turkey has also been supplying the Venezuelan government’s CLAP, a food program with essential products, in what seems to be gold for food program. To this end, the US has not only imposed sanctions on Minerven, Venezuela’s state-run gold miner, but has sanctioned Venezuelan gold exports as well.

Venezuela, however, is not the only country under US sanctions turning away from international trading in dollars to gold. Russia, for instance, has cut its foreign dollar reserves share by half and replaced it with euro, Yuan and gold holdings. Gold will assist the sizeable Russian oil exports in progressing unabated by reliance on the dollar amid growing US sanctions. To this end, Moscow has recently increased its gold reserves by $27.2 billion.

The increased spate of US sanctions on various countries has been very positive for the gold market. Consequently, the haven investment has been on a six-year high, breaking the $1500 psychological threshold and is still rising.  According to the World Gold Council, central banks worldwide increased their gold holdings by 68 percent, buying over 145.5 tons of gold in the first three months of 2019.

Besides increasing central banks’ hoarding of the precious metal worldwide, the demand for gold in emerging countries has skyrocketed. The escalating conflicted environment that the US created weaponizes economic tools for foreign policy wins is forcing countries and their citizens to turn to dollar alternatives for safety in investment.

Gold has become the preferred world repository for savings. As an illustration, Russia, Turkey, and China have made some of the most significant gold import numbers in 2019.

There seems to be no amicable solution to the economic and political uncertainties raised by the US. The European shaky geopolitical climate and rising tensions in the Middle East, plus a possible recession, are all factors that will add more fuel to the current gold rally. Individual as well institutional investors can now access a flexible and transparent gold purchase system from Novem Gold.

We are a gold and precious metals dealership that has designed a blockchain-based solution that is disrupting the traditional gold purchase and trading system. Via our unique NEO blockchain-based tokens, you too can now buy gold from the comfort of your home in any location in the world. Our NNN token, for instance, is fully backed by LBMA-certified gold. We are at the moment selling our NVM tokens, whose sales will fund the opening of over 100 gold dealership stores across major cities in Europe.

These stores will help bring in more gold to the Novem ecosystem, which will then be tokenized for safety and transparency while in storage in our storage facilities at Trisuna Lagerhaus OZL in Triesen, Liechtenstein.

To keep the momentum going, we have opened our first brick and mortar store in Landstraße 1, 4020 Linz, Austria. Visit us and learn why tokenized gold trading is the new frontier in the gold trade. It is not only easy to buy but also easier to sell, trade-in, store, and redeem too.

We are performing regular audits to keep out investors in the know, and Grant Thornton will perform the quality assurance of these audits.

Gold purity: What are the Criteria for Pure Gold?

Yes, China is Hoarding Gold: Is That Positive for Prices?