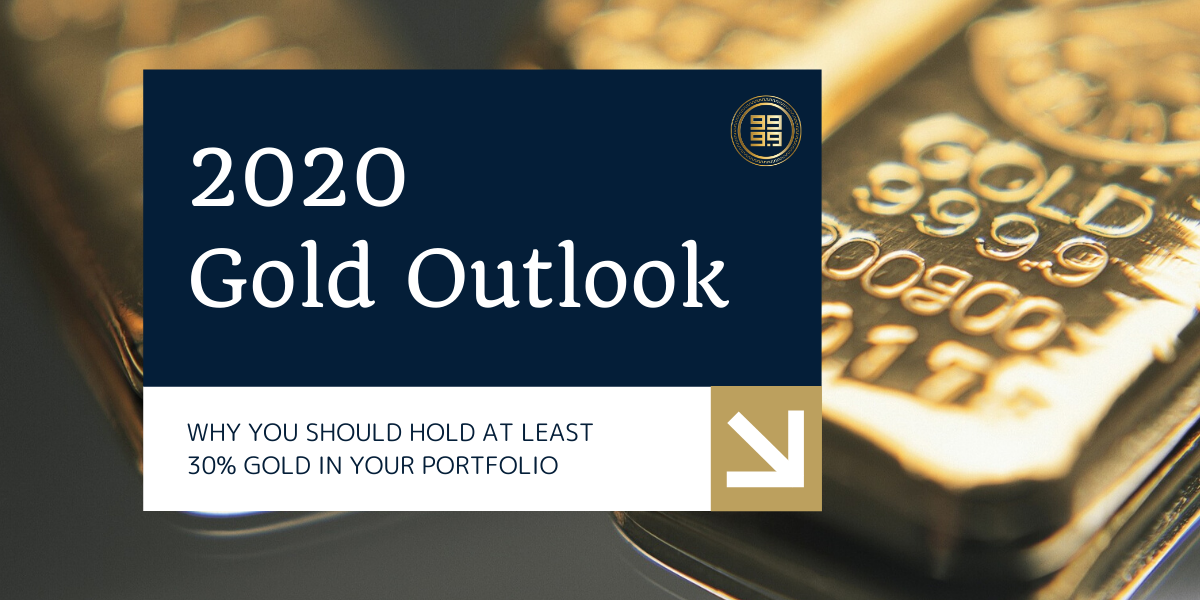 Dennis Gartman, the former editor and publisher of The Gartman Letter, recommends investors hold at least 30% gold in their portfolio. He made these comments in an interview with a panel of investors by a leading gold news outlet, Kitco News. The particular question was how they would invest $100,000 in the coming decade.

Gartman described his approach as follows:

The US economy is closing the decade on a pretty firm footing. The S&P market index is experiencing its longest bull run in history, being up 184% since 2010. However, the global economy is awash with uncertainty that caused some hiccups in 2019.

Interestingly, gold is attracting keen interest, even with a rallying stock market. Prices may be lower than record highs in 2011, but holding gold is still extremely lucrative. The precious metal looks to end the decade with a gain of 34%.

Such a paradigm is not conventional in the modern history of stocks and asset investments. To have a big year in both stocks and defensive safe-haven assets is quite unusual. Both cautious and aggressive investors can claim victory from how the year has panned out. However, hedge funds bore the brunt of this extraordinary market as many bullish strategies got clobbered from the upheaval.

This dynamic points at a market with more temperamental liquidity than previously thought. Bank of America has released an insightful analysis titled, “The World’s Most Liquid Stock Market Is Now as illiquid as it was in the 2008 Crisis.”

Gartman has left his position at the famed Gartman Letter after 30 years. His experience gives him a unique perspective on this market. He sees gold as a vital part of portfolio diversification in the coming year. A significant trend will be the return to commodity markets as inflationary pressures return. The expansionary policies and low-interest regimes of most prominent central banks are a massive reason for this.

In its last meeting of the year, the US Federal Reserve confirmed that it would not raise interest rates soon. President Trump relies on economic growth as his signature achievement heading into a reelection year. Even though the FED is an independent agency, Trump’s relentless attacks on chair Jay Powell have had some effect in the recent past. Trump is never hesitant to go on Twitter to remind everyone that the S&P 500 has broken its record highs at least 135 times since his election.

Therefore, the expansionist policies that facilitate cheap money flowing into the economy will likely hold through 2020. As for the stock market’s bull run, Gartman takes the cautious position that a bull run ends when it does. Accurately forecasting the next downturn is not a walk in the park. This new decade may continue the optimism that the last has finished with.

On the other hand, trade tensions still cast a cloud over next year’s forecast. Trade talks between the US and China are still in progress. Interestingly, investors were not as impressed with the Phase 1 agreement of the US-China trade deal as many expected. Gold prices held up as investors await news of the second phase of the trade deal.

These uncertainty triggers will play a significant role in shaping 2020 economic performance. Brexit and EU growth stagnation are other significant factors to watch for. The market is operating as though these events are in the past, but their ripple effects can still rock stock markets in 2020.

The US has an historic economy, yet is on the cusp of rerunning a trillion-dollar deficit. You have to go back to 2009 and a few years after to find such a period of spending. Former FED chair Alan Greenspan contends that this phenomenon will eventually lead to an exponential inflation rise. Speaking to CNBC, Greenspan stated that he is worried about US consumer price inflation.

There is a lot of merit to such a sentiment. After all, the easy monetary policies and a reaccelerating economy set the stage for higher commodity prices. However, it is not easy to forecast a tipping point for inflation in the short-term. The markets don’t seem to be as worried about the ballooning deficit as hawkish analysts are. It remains to be seen whether the low unemployment and positive outcome of trade deals will stem this tide in 2020.

The Current Status of Gold

Even though the stock market has had an historic bull run, gold has had a strong rally of its own. This run is reminiscent of the 2011 cycle when gold prices looked to cross the watershed $2,000 mark before dissipating. Incredibly, this period is not a global recession like the last time gold prices were this high. Gold is traditionally a defensive asset. Its strong performance in a great year for stocks shows that there is more to the story than meets the eye.

The low-interest era means that a lot of money will be flowing in the economy. Naturally, such a glut lowers the value of fiat, indicating that stable assets like gold and Bitcoin are more attractive as a store of value.

Gold has risen past the $1,500 mark in recent days of trading. This latest rise is consistent with 2019 patterns, which have seen gold spot prices rise over 15%. Remarkably, this solid price is occurring at a time of historic stock runs.

The end of the current bull run is challenging to predict. However, in the event of such misfortune, gold is the right investment to absorb shock in your portfolio. Gold prices are not affected negatively by slides in the stock market. Additionally, scarcity and consistency place gold at a higher value than other real assets.

Investors Adding Gold to Their Portfolios

A recent Kitco News report  shows that big speculators have rebuilt bullish positions in gold futures. The analysis relies on data from the Commodity Futures Trading Commission (CFTC) from the most recent reporting week.

CFTC data capture activity, namely short and long positions on gold. In the most recent data, net long positions of fund managers rose to 201721 from 183648. The figures captured trends up to December 17. Long positions are contracts guaranteeing the purchase of gold at a specific price in the future. Such an increase is indicative of positive sentiment about gold prices rising in the coming weeks of trading.

Much of the bullish sentiment around gold is because of the FED’s confirmation that it would not raise rates soon. The FED’s dovish sentiment despite the already strong economy was enough to channel wind into gold’s sails. Accordingly, investors are hedging against inflation in the near future.

Traders have multiple ways to add gold to their holdings. Other than holding bullion, they can invest in gold-backed ETFs. With the option of tokenized gold trading in the market, investors can hold bullion without the inconvenience of storage or security.

Moreover, there is always the possibility that stocks can tumble from their record highs. In such a scenario, gold is the perfect safe-haven. Gold is the most stable of all assets, and the tailwind from such an event would be massive.

In summary, holding about 30% gold in your portfolio is not only a safe strategy but also one that can have a tremendous upside. With a robust gold market to close out 2019, the next decade looks set to begin with a prolonged gold bull run. The likes of Ray Dalio certainly understand this dynamic. Gold is no longer an old-school doomsday asset but rather a core part of the modern financial world. Its ceiling could be very high.