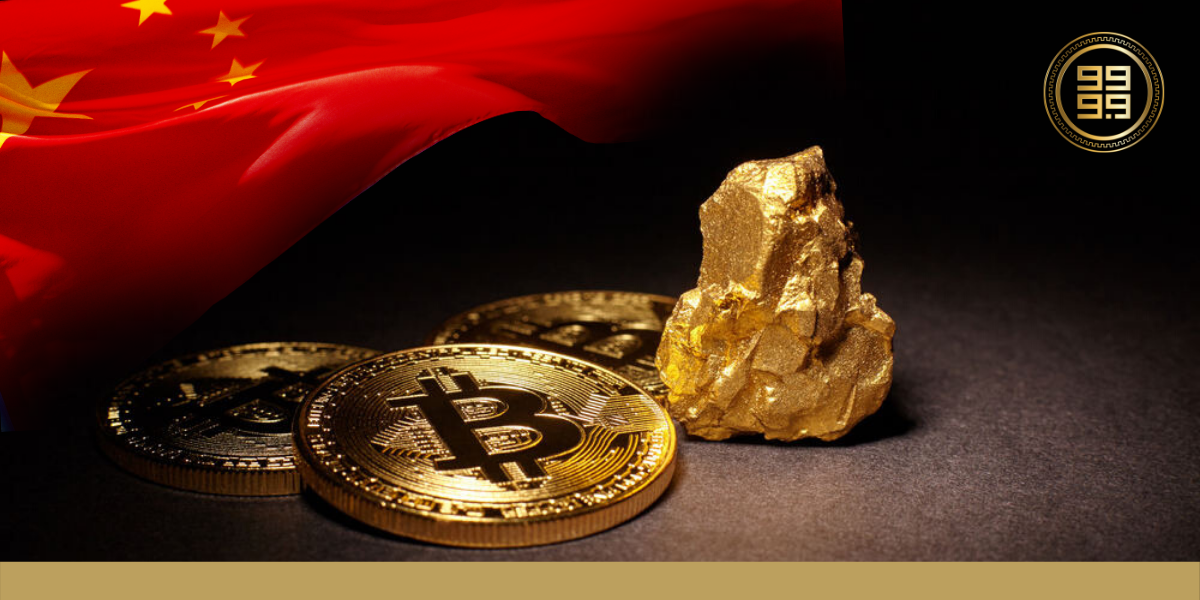 It is no longer news that China is building up its gold reserves at an unprecedented rate. In 2019, for instance, the People’s Bank of China (PBOC)’s gold reserves have risen by over 100 tons. The country’s gold buying spree has been on for a few years, with a significant spike in these purchases kicking off in 2015. This increased activity in gold oriented activity has raised the eyebrows of many analysts and critics. It has led most of them to the conclusion that China is de-dollarizing and beefing up its currency with its growing gold reserves. Will China launch a Gold-backed Cryptocurrency to “Toast” the USD?

There have been signs that the country’s economics and finance government officials are becoming less Keynesian than their western counterparts. This has perhaps been brought about by the realization that China’s ability to deal with a global credit crisis is more compromised than its Western economic superpower peers.

The signs are clear; the global financial markets are headed to a recession, and the debt crisis in the US has ballooned to unmanageable levels.  Chinese economists have, therefore, been embracing more sound money practices than they ever did before. These fiscal policies are less prone to manipulation and can help build the country a free market system. Such a system could pull China away from a crumbling dollar-based monetary system. The only way out for this East Asia giant is to discard the economics of the West adopted earlier on in the race for self-advancement.

China and its Relationship with the USD

China adopted many of the West’s fiat system’s limitations, flaws, and dangers. The country’s recent race in gold accumulation, however, shows that there is a willingness and indeed courage to correct those mistakes of the past. In China, it is not just the PBOC that is saving up more gold, but they have encouraged its citizenry to do so as well.

This drastic change in fiscal policies has, of course, received sharp criticism and judgment from the West. The populous nation, however, seems set to see the changes through. Eventually, China could be in a better position to handle economic crises better than most of its critics can. Because while China can handle massive change, her peers are already too entwined and dependent on a flawed monetary system to embrace radical change.

After Chairperson Mao’s death in 1976, the leadership realized that the only way they have encouraged its citizenry that they could move the nation from its economic doldrums was to embrace capitalism. The Communist Party, therefore, put structures in place that concurrently allowed control and capitalism. Deng Xiaoping, also known as the man who reinvented China, made profitable economic reforms, efficiently combining free enterprise and socialism. His efforts turned China into the world’s fastest-growing economy for decades. They also ended the extreme levels of poverty prevalent in the nation. Deng sided with the US reaffirming the USSR as an adversary. A strategic relationship with the US then developed because of the shared enemy.

These ties culminated in a 1972 visit by Nixon, further strengthening the US-China ties. In the decades that followed, more American corporations took a foothold in China. Businesses from the West rushed east to enjoy the benefits of a hardworking but cheap labor force, as well as relaxed planning and regulations laws.

By the early 80s, the PBOC had amassed sizeable foreign exchange reserves and was dealing with a currency problem. Fortunately, China, like the Germans and the Arabs, began to appreciate the wide differences between fiat and gold. They, therefore, began to hoard gold, fueled by Marxist sentiments taught in Chinese state universities. Gold and silver holdings were banned from individual holdings and were solely managed by the PBOC.

It is believed that China accumulated a sizeable amount of gold in the 80s in the absence of a retail gold market.  It diverted a small portion of these precious metal holdings into its central bank reserves. Come the 90s, and China was embarrassingly knee-deep in dollar reserves. Fortunately, the gold market was in a slump which gave Beijing a strategic reason to buy more gold.

After the collapse of the USSR, the shared diplomatic front that China and the US had crumbled.  The East Asian country’s inward flows were rising because of increased exports, building a new class of wealthy Chinese elite. America, on the other hand, began to obsess over its counterpart’s economic prosperity that was threatening its global dominance hold.

This change in status made gold a critical asset and a hedge against monetary unknowns. Consequently, China increasingly accumulated precious metal as a strategic asset. While the western central banks made the rookie mistake of selling bullion in a falling market, China bought more. During this era, China also began to invest in gold mining. It is the world’s largest producer of gold now. The nation is also the world’s largest importer of gold, which has led China to set up policies that will help it tighten its grip on the global bullion trade.

China Could Own More Gold Than It Lets On

Beginning in 2002, it allowed Chinese investors to buy gold for themselves. The state media took to the streets, encouraging investments in the precious metal. Any onlooker would say that perhaps the administration only allowed retail gold purchases after it had satiated its need for bullion. Since then, Chinese citizens have collectively accumulated over 15,000 tons of gold. They hold gold as an alternative store of value to their currency.

Many pundits, therefore, argue that it is impossible to tell just how much gold the Chinese government owns. Conspiracy theorists say that the 80s to 90s gold bear market, coupled with decades of increased capital flows and mining supply might have given China, gold holdings above 15,000 to 20,000 tons. While the truth will remain unknown, gold has indeed taken center place in China’s fiscal policy setting.

The country must have, therefore determined decades ago, that gold will become official money once more. There is little explanation why China would go to such great lengths to monopolize the bullion market, as is the case today. If its incoming generation of leaders can uphold the momentum of gold accumulation, China may have a gold-backed currency soon, as the value of gold rises.

If there is a China launch a Gold-backed Cryptocurrency, it could bury the USD.  The US has a very poor book balance, and for its administration to adopt sound money policies, it would have to cut down on government spending heavily.

Data shows that while China’s budget is about $1.86 trillion, it only has a -1.7 percent budget surplus. The US, on the other hand, has a $2.45 trillion budget, the largest in the world, and has a shortfall of -6.8 percent, four times more deficit than China.

Are Central Banks Turning Their Backs on the USD?

Many analysts agree that China’s preoccupation with gold is a good sign that they are diversifying away from the USD. In the first half of 2019, the PBOC has purchased gold every single month without fail.  Max Keiser, of the Keiser Report, however, has an even more interesting theory. He believes that China is about to launch a gold-backed cryptocurrency. He says, “[China] is rolling out a cryptocurrency, a lot of the details have not been divulged. I can tell you that the cryptocurrency that China’s rolling out will be backed by gold”.

It is incomprehensible that the world’s money coffers are controlled by a small group of people that print trillions of it by simply pushing a button. The world is currently beholden to the dollar whose M2 money supply today stands at $14.466 trillion. The US holds 261,492,025 troy ounces of gold in its reserves.  This implies that less than 4 percent of the printed USD is backed by gold. Its value depends on the economic and political wellbeing of the US administration. With a China launch a Gold-backed Cryptocurrency in any form would leave the almighty dollar in the dust and increase the demand and value of gold. There, therefore, has never been a better time to buy gold than now.

Novem Gold’s NNN and NVM tokens are disrupting the overly complicated traditional way of buying gold. Our products will enable anyone anywhere in the world to access top-notch quality gold investments at the comfort of their own home.

The proceeds from the ongoing ICO will launch over 100 Novem Gold stores across Europe to help investors bring in their gold assets to a secure ecosystem. Our first store at Landstraße 1, 4020 Linz, Austria, is already in operation, and you can visit us at and enjoy our superior sales, minting, and testing services. The NNN token will be backed by gold stored in our secure storage facilities in Liechtenstein.

Also, we do carry out regular audits in partnership with Grant Thornton, and you can access these reports on our website.

Gold is Superior and You are Probably Underinvested

Is Blockchain a Threat to Bureaucracy?